Mazda’s best-selling model enters the 2017 model year with a new concave, three-dimensional grille, more than 250 improvements and the long awaited arrival of a diesel engine option.

The chassis is 15% stiffer for a more compliant ride and improved sound insulation and G-Vectoring Control leads to smoother, more accurate steering inputs.  The design team calls the inspiration for the all-new CX-5’s design “Refined Toughness” – a less is more philosophy.  This new Soul Red Crystal paint launches here, carrying the luster of a concept car paint finish but in a mass-production color.

The SKYACTIV-G 2.5-liter 4-cylinder engine is back, producing 187 horsepower and 185 pound-feet of torque, paired exclusively with a 6-speed automatic transmission…improved for better throttle response.  Gas mileage is rated at 26mpg in combined driving.  And Mazda says this time they really will bring a diesel to the United States – a 2.2-liter motor available later in the model year.

The pursuit of ‘Mazda Premium’ began with the 2016 CX-9 and carries over to the new CX-5. Mazda says “Once situated, the driver is surrounded by soft-touch, high-quality materials on every touch point, emphasizing a sense of craftsmanship.  The center console has been raised to cocoon the driver in a focused atmosphere that complements Mazda’s driver-focused philosophy.  And the A-pillars have been pulled back lending to greater visibility. Much focus was paid toward improving the ease of conversation between first and second-row passengers, and further reducing wind and road noise as well. 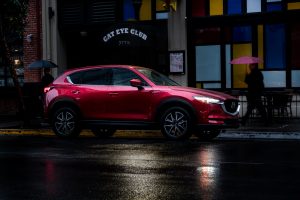