Hyundai is expanding its eco-friendly vehicle lineup with a 1-2-3 punch centered on a single vehicle platform. When the first-ever 2017 Ioniq  Electric hits dealerships this fall it will subsequently be followed by a Hybrid and Plug-in Hybrid, giving Hyundai a trifecta of alt-fuel hatchbacks aimed squarely at the Toyota Prius.

This Ioniq Hybrid features a new 1.6-liter direct-injected 4-cylinder engine running on the efficiency-minded Atkinson cycle, delivering an estimated 104 horsepower.  Utilizing a 6-speed double-clutch transmission differentiates the Ioniq which has been developed for a more dynamic and engaging driving experience.  Paired with a 32 kW electric motor, the Ioniq produces instantaneous torque at low speeds with available power assist at higher vehicle speeds.

A pure electric driving mode is also possible.  A 1.56 kWh capacity lithium-ion battery is positioned under the rear seats so that the passenger cabin and cargo area is uncompromised, offering more interior volume than the Prius.  Total system output is 139 horsepower.  The driver can select either SPORT or ECO modes, depending on the mood. 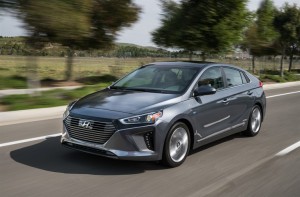 Creating unique identities, each Ioniq has its own character.  For example, this Hybrid is distinguished by Bi-Xenon headlights with LED positioning lamps, contrasting colors at the base of the fascias, 2-tone 15- or 17” wheels and the choice of 2 interior environments.  Materials for the interior were chosen with an ecologically sensitive focus to create a simple and clean look.