The pickup truck market is on fire once again and though the stalwarts offer rigs in every imaginable configuration that doesn’t mean there isn’t room for some fresh thinking. Enter the all-new, next generation 2017 Honda Ridgeline.  Last seen during the 2014 model year, the flying buttress design has been jettisoned for a more traditional truck look but that’s just about where traditional truck values end.

While the big boys slug it out in the payload and towing arena, the Ridgeline is all about striking a balance between need and want.  It’s a midsize, perfectly suited for typical weekend warrior duty and yet engineered to be as on-road friendly as a Pilot or Odyssey – the vehicles with which it shares its unibody underpinnings.  With a fully independent front and rear suspension featuring Honda’s Amplitude Reactive Dampers, the Ridgeline is setup to handle small road irregularities as well as large inputs resulting from rough roads.  Honda says the Ridgeline has the largest and most flexible cabin in its class, a higher level of confident and refined dynamic performance, and robust cargo-hauling and towing capabilities, including a class-leading maximum 1,584 lb. payload capacity and up to 5,000 lb. towing.

Under the hood is a new 3.5-liter direct-injected V6 with Variable Cylinder Management mated to a wide ratio 6-speed automatic transmission.  With 30 more horsepower, 15 more pound-feet of torque and a weight reduction of about 80 pounds, the new Ridgeline is poised to be the quickest and most efficient in the class.  Rated at 280 horsepower, 262 pound-feet of torque and netting between 25-26mpg depending on drive configuration, the Ridgeline is offered with the new Intelligent Variable Torque Management AWD System.  It now includes a hydraulically actuated rear differential and torque vectoring across the rear axle.  This means the Ridgeline delivers more responsive, neutral and predictable handling performance while providing outstanding all-weather traction and control.  And to make it easy, it’s a fulltime system that requires no driver interaction.  In more extreme conditions, the Intelligent Traction Management System can be employed to best suit the situation – Snow, Mud or Sand.  And for the first time, a front wheel drive model is also available. 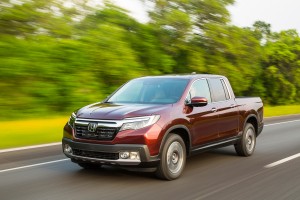 The original Ridgeline was well known for its Dual-Action Tailgate and In-Bed Trunk and those features carry-over here. With no bed liner required thanks to its new innovative composite construction, the bed itself is longer by nearly 4” and wider by 5.5”, making the 2017 Ridgeline the only truck in the class that can flat haul 4’ wide items on the floor between the wheel wells.  A new twist is the Truck Bed Audio System for ultimate tailgating capabilities.  For more carrying capacity, the 60/40 split and folding rear seat not only accommodates up to 3 passengers but also has the ability to carry bulky items while large under-seat storage can carry long items such as golf clubs.

A base 2-wheel drive Ridgeline RT is priced at $30,375 including destination. Seven trims levels are available leading to the range topping Black Edition AWD with a starting MSRP of $43,770.