In case you haven’t noticed, off-road trucks are a thing and they’re gaining in popularity. No longer do you need to upfit a garden variety pickup with aftermarket parts to accomplish the task.

Companies like GM are providing the opportunity to buy these serious off-road trucks straight from the factory.  Case in point the new 2017 Colorado ZR2; a midsize truck that comes heavily modified to excel in a variety of challenging environments.  Chevy calls it a performance halo for the Colorado lineup and it can be spec’d in either extended cab with long box or crew cab with short box.

The 3.6 V6 and 2.8-liter Duramax diesel engines are offered.  Base MSRP is $41,000.  Tapping the motorsport-derived suspension technology that first appeared on the Camaro Z/28, the ZR2 uses what is called Dynamic Suspensions Spool Valve dampers for greater confidence and control in a wider range of driving experiences, from technical rock crawling to tight two-track trails to high-speed desert running to daily driving.  Compared to a standard Colorado, the ZR2 features a much wider track and a 2” lifted suspension. Functional rockers have been added for better performance over rocks and obstacles, and the front and rear bumpers have been modified for better off-road clearance. 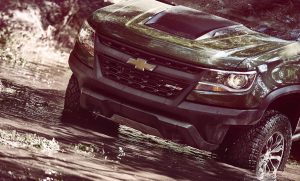 Unique 17” wheels are wrapped in 31” Goodyear Duratec off-road tires.  The front bumper of the ZR2 has tapered ends, to increase the tire clearance when approaching obstacles.

The bumper also integrates a thick, aluminum skid plate protecting the radiator and engine oil pan, while the transfer case is protected by an additional shield.  Optionally available is a bed-mounted spare tire carrier.  With electronic locking differentials front and rear the ZR2 offers 9 drive configurations with variations of 2WD, Auto and 4WD.

A new “Off-Road Mode” button allows the anti-lock brakes, traction control, and stability control calibrations to be tailored to different driving conditions. It also alters the throttle progression and shifts calibrations to give the driver better control and responsiveness.

The V6 makes 308 horsepower mated to an 8-speed automatic netting 17mpg while the diesel yields 369 pound-feet of torque paired to a 6-speed automatic transmission producing 20mpg.  The ZR2 can tow up to 5,000 pounds.