(STEVE) Alfa Romeo’s reintroduction to the U.S. market continues with a new sedan to complement the 4C 2-seater and new Stelvio SUV…

(STEVE) …the mechanics of emotion.

You can walk into any of Alfa’s 160 U.S. dealers and leave with a new Giulia for under 40 grand. It would come with a 2.0-liter turbo making 280 horsepower, accelerate faster than most and could even be equipped with all-wheel drive.  But this here is the halo model – the Quadrifoglio with a starting price of about $73,500; as close as you can get to a Ferrari engine without being filthy rich.  With perfectly balanced midsize proportions, rear-wheel drive and a twin-turbo V6 with a massive 35 psi of peak boost, this is the quickest Alfa Romeo production car ever.  But if that’s all it was, the Giulia Quadrifoglio would be just another fast car.  This Italian love story has many more chapters, though.  It’s the kind of car that performance enthusiasts dream about.  And before you scoff at the automatic transmission, I guarantee you there is no such gearbox that’s quicker and more satisfying to drive.  I had to keep checking the specs to make sure it wasn’t really a dual-clutch.  With huge, fixed paddle shifters and gear changes as aggressive as you desire, even purists will have a hard time kocking this 2nd generation ZF 8-speed.  It’s unbelievably good.  And then there’s this 2.9-liter 505-horsepower V6 fed its air by 2 single-scroll turbos.  When taking off from a standstill there’s a surprising moment of hesitation before hyperspace hits.  Still, it takes only 3.8 seconds to reach 60mph though a launch control mode would be a welcome addition.  But the most impressive acceleration occurs after you’re already moving.  Working through the gears, throttle reaction is ultra-responsive with a number of driving modes from which to choose. Take it to over 190mph if you dare. 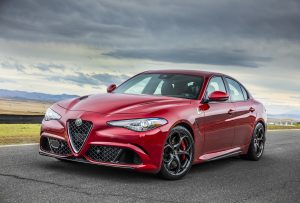 (NICOLETTE) The Alfa DNA Mode Selector is equipped with a Race mode that activates the turbo’s over-boost function, turns off stability control, opens up the exhaust, and sharpens all of the other driver controls.

Advanced Efficiency and Natural settings are perfect for calm, in-city, family-type driving and much to my surprise; this Giulia accomplishes it with aplomb. Running counter to the hardcore experience found in the 4C, the Giulia is not a car that has to be driven fast to be enjoyed.   The cabin is quiet and the active damping suspension is quite palatable in its softest setting.  It only goes full firm mode when in Dynamic or Race, but even then you can back it off with a push of a button.  There is a button I would like to see added however and that’s for the two-mode exhaust, which is tied directly to the DNA mode, so if you want more sound you have to keep dialing it up.  The electronic stability control is tied into this setup as well so there’s no independent means by which to shut it off other than going into Race. But at least you’ve got luck on your side.

(NICOLETTE) Back in the 1920s there was a very superstitious Alfa racecar driver named Ugo Sivocci who was notorious for coming in 2nd place.  That was until he decided to paint a 4-leaf clover or Quadrifoglio on his racecar and guess what; he won his next race.  In a few weeks though, Ugo was asked to test a new Alfa racecar and before he had a chance to paint his famous 4-leaf clover on the car he crashed and died.  And there, a legend was born.

I’ve driven thousands of cars over the past 20 years but I don’t recall ever driving a 4-door that handles and accelerates as awesomely as this one. Being lightweight with huge turbo thrust, a glued to the road sensation, super light and quick steering and so willing to do what you command, the Giulia is a performance sedan juggernaut. Its dynamic range is exceptional.  If the infotainment electronics weren’t complete junk and the pall of unreliability didn’t hang over its head, this would be a must buy.

My low-mileage tester had issues with the auto stop/start engine feature and even once with the electronic throttle control. Do these portend future problems? And though it looks good, Alfa would be wise to quickly replace this relic with some good ‘ol FCA electronics – this is by far this car’s most glaring shortcoming. These optional carbon fiber racing seats are a perfect fit but those in the rear are treated to a seating experience that could use more cushioning. There is plenty of room however, and even a USB port. And carbon fiber is a critically strong and lightweight element of this car, found in the hood, roof, drive shaft, rear spoiler and the active aero front splitter. To shave some money off of the nearly $90,000 as-tested price of this one, you could forgo these Brembo carbon ceramic disc brakes if taking the Giulia to the track frequently isn’t in the cards. They take a while to warm up and are not friendly to normal driving. They also cost 8 grand. Interestingly, the brake feel is also dialed into the DNA Control – something I’ve never seen before. And with the Driver Assistance package, there’s also modern safety features such as Forward Collision and Lane Departure Warning. Because the engine can run on 3 cylinders under light load, the Quadrifoglio can net as high as 24mpg on premium of course so there’s no substantial trade-offs or compromises in making this an everyday car, other than the fact that all-wheel drive is not an option on this trim.

With torque vectoring increasing the handling limits, this is such an easy car to drive fast and expertly. Never ruffled, you have complete control here with steering to die for.  If you can overlook the BMW-style shifter and some other unbecoming interior design features, this is the new sports sedan champion.