I love new cars. That’s my specialty. And as you know, I test-drive everything from the cheapest to the most expensive and even an RV in between. And though I enjoy the wide spectrum I’d be lying if I told you that some weeks weren’t better than others. Case in point. This week. Where I’ve got the keys to the most powerful production Cadillac ever. The 3rd generation CTS-V. 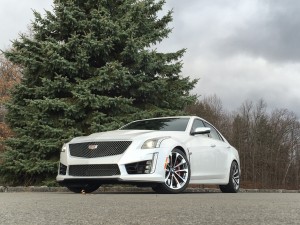 GM’s all-new LT4 supercharged 6.2L V8 is straight from the most powerful Chevy ever made – the Corvette Z06.  For about $16,000 you can order one for your next project car or for 70 grand more, get one already installed in a car with 4 doors that’s as fast as a Stingray.  Here in the CTS-V, it produces 640 horsepower, 630 pound-feet of torque and a supercharged soundtrack for the ages.  And before you decry the lack of a manual transmission, you should know that the new 8-speed auto is incredibly quick and smart, with the optional use of magnesium paddle shifters, small steps between gears and Performance Algorithm Shifting that puts it performance-wise on par with some of the dual clutch gearboxes in its class while preserving a classic smoothness the others can’t match.  I’ll take a supercharged engine over a turbo in a car like this any day, where its power is omnipresent regardless of RPM.

But understand that this isn’t a smaller Charger Hellcat.  Once you get past the powertrain similarities, the differences are quite pronounced.  The CTS-V is a handling machine, thoroughly fortified and suspended by track-capable driving components all tuned for greater connectedness, solidity and reduced body motions.  It takes the on-demand power delivery of the brutally quick supercharger and melds it with the engineering precision you thought was only available in Europe.  Well guess what?  Cadillac is serious about building no-excuses, world class performance cars and the CTS-V is your reward for their toils.

If you’ve ever driven a V-Series before then you probably remember the feeling of suede in your hands and form-fitting Recaro seats.  But this CTS-V has taken Cadillac’s luxury performance game to an entirely new level.  As the driver, you can sense how muscular and ripped it is…there’s palpable tension here.  It wants to be pushed to the limits, gripping every bit of pavement like it’s a matter of life and death.  Cornering is so flat and the limited slip bites so hard that attacking your favorite roads is like child’s play.  You’re dealing with 640 horsepower here so the CTS-V isn’t for the inexperienced driver, but the wide Michelins and MRC dampers keep this car poised under pressure.  But without track time, the car is starting to feel as frustrated by the lack of challenges as I am.

The CTS-V can be your everyday car…a bit louder, mind you, but it’s that accommodating, luxurious and comfortable; just don’t do anything stupid like goose it an imprudent moment.  Selectable driving modes, exceptional build quality and the full arsenal of electronic creature comforts assure a very composed experience when desired.  But after a while, the superfluity practically begs you to take it to a track, where you can truly play with the very detailed Performance Traction Management system, experience launch control takeoffs from 0-to-60mph in 3.7-seconds and even capture your heroics with this…

The Performance Data Recorder is such a cool option.  Just pop an SD card into the slot located in the glovebox and choose an overlay if you wish.  Press record and now you’ve got HD quality video of your drive plus certain metrics.

The CTS-V is a midsize with true seating for 4 and a workable trunk.  While CUE, short for Cadillac User Experience, is initially overwhelming tech geeks will love it, both for its depth of features and cutting edge looks.  Apple CarPlay is here, a built-in 4G Wi-Fi hotspot, OnStar, wireless phone charging, automatic parallel and perpendicular parking, heads-up display, a curb view camera to help protect the front splitter and much, much more.  It’s a tech dream world.  And these optional Recaro seats with a multitude of adjustments are a perfect fit.  Because it’s a thirsty beast netting 14mpg city on premium, there’s a $1,000 Gas Guzzler Tax, and with other optional equipment, MSRP of my car is an earnest $91,885.  But when you see the carbon fiber hood, feel the exactness of the steering, press the firm brake pedal and experience nearly 1g of grip from the Super Sport tires, that price not only makes sense, it starts to look like a bargain.