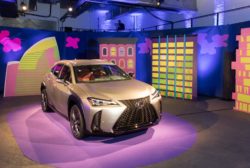 With its bold new design and new ultra-efficient powertrains, the 2019 UX opens a new gateway into the Lexus brand as its first-ever compact luxury crossover. The head-turning UX arrived at the New York International Auto Show for its North American introduction weeks after its world debut at the 2018 Geneva Motor Show. It joins Lexus’ full lineup of luxury and performance vehicles. 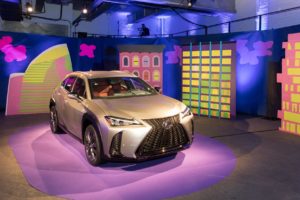 “The first-ever Lexus UX is designed for the modern, urban explorer seeking a fresh, contemporary and dynamic take on luxury driving,” said Chika Kako, executive vice president of Lexus International and chief engineer of the UX. “We designed the UX to appeal to buyers in their 30s who seek not only what is new and exciting, but what is also relevant to their lifestyles.”

The UX’s bold and stylish design blends expressive bodywork with a compact size, and its crossover credentials are signaled by its muscular haunches and high beltline. The UX is the first Lexus to use the brand’s GA-C (Global Architecture – Compact) platform. The super-rigid structure and low center of gravity help the UX deliver exemplary handling agility and ride comfort, along with a distinctive driving personality.

The 2019 Lexus UX will be available in two versions. The UX 200 introduces a new 2.0-liter, four-cylinder engine coupled with a new Direct-Shift continuously variable transmission (CVT). The UX 250h pairs the same 2.0-liter gas engine with a new fourth generation hybrid drive system. New technology that networks with navigation allows the UX 250h to proactively optimize hybrid operation by learning and adapting to the driver’s routes and driving habits.

The UX will be joined on the show floor by the all-new three-row RX 350L, which continues a cross- country tour that began at the 2017 Los Angeles Auto Show. The RX created the luxury crossover segment 20 years ago and has reigned supreme as the most popular luxury utility vehicle on the market. With the new model, Lexus drivers will now have the option of a third row without compromising the sleek styling and easy maneuverability. A longer body length and steeper tailgate window angle ensures good headroom for third-row passengers. 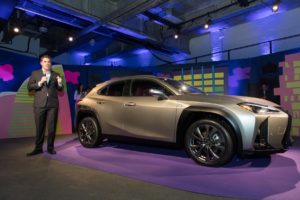 In the new model, the full-length side curtain airbags cover all three rows and it features the standard Lexus Safety System+. The vehicle features plenty of power with 290 horsepower and 263 lb.-ft. of torque with a 3.5-liter V6 engine and eight-speed Electronically Controlled Transmission with Intelligence (ECT- i).