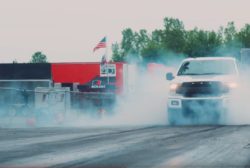 ROUSH Performance announced that its 2019 ROUSH NITEMARE F-150 4×4 is now the quickest production truck ever produced, based on comparison to 0-60 mph production vehicle test data published by leading U.S. automotive magazines as of June 2019. 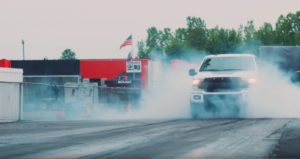 Two configurations of ROUSH Performance NITEMARE 4X4 trucks were tested by a team of automotive industry experts including Jack Roush Jr., ROUSH-sponsored professional drifter Justin Pawlak, automotive personality Aaron Kaufman, racer and journalist Robb Holland, and a team of ROUSH Performance engineers. The trucks were run on a prepared drag strip in Sport mode with rear differentials locked (both of which are standard user-selectable settings), a light fuel load, and the standard Continental tires that come factory-equipped on all ROUSH vehicles inflated to 32 pounds per square inch. The 0-60 mph times were measured using a VBOX DriftBox, which rounds to the nearest tenth of a second with a +/- one percent margin of error. The production NITEMARE 4X4 SuperCrew pickup hit 60 miles per hour in a record-setting 4.1 seconds.  An engineering test truck equivalent to a production NITEMARE 4X4 Regular Cab pickup broke the elusive 4 second mark, hitting 60 miles per hour in a record-setting 3.9 seconds.

“It’s one thing to just add raw power to a vehicle, it’s another to truly engineer it,” said Jack Roush Jr. “With 650 horsepower, the NITEMARE delivers power unlike any other truck while retaining the reliability and refined feel you’d expect from any ROUSH vehicle.”