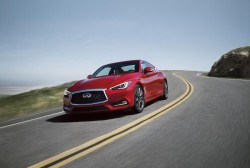 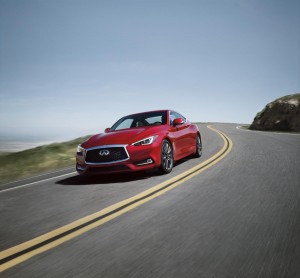 “The new Q60 Red Sport 400 has more horsepower than we’ve ever put in any INFINITI sports coupe, and will hold a strong position against its competitors with a significant power advantage,” said Randy Parker, vice president, INFINITI Americas. “And, with its unmistakable styling and next-generation ride and handling technologies, we expect the all-new Q60 to continue INFINITI’s legacy of advancing the sports coupe segment.”

The Manufacturer’s Suggested Retail Prices* (MSRP) for the 2017 INFINITI Q60 Red Sport 400 are:

Destination and Handling $905 USD
The all-new INFINITI Q60 Red Sport 400 takes the third-generation of INFINITI’s renowned sports coupe into a new level of empowered driving. The Red Sport 400 features 400 horsepower and 350 lb-ft of torque from a sport-tuned, high-output version of the new VR-series 3.0 liter V6 twin turbo engine – a more than worthy successor to the renowned, highly awarded “VQ-series” V6 that has been a mainstay of INFINITI performance models for many years.

Inside, the Q60 Red Sport 400 interior expresses a sense of artistry and craftsmanship that matches the seductive exterior design. The interior is modeled around the concept of a “driver’s glove” – fitted, personal and tailored for the person behind the wheel.