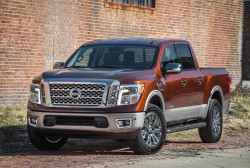 With the all-new flagship XD model of Nissan’s reimagined TITAN family of pickups already in dealer lots, this volume model, half-ton TITAN will go on sale in the late summer of 2016. TITAN will initially launch as a Crew Cab model with Single and King Cab variants planned for later in the model year. 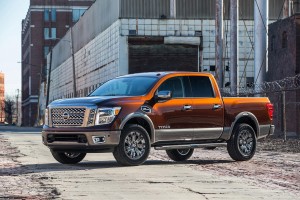 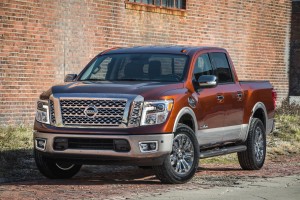 “TITAN shares its aggressive style with the TITAN XD, but the two vehicles are completely different underneath the skin,” said Fred Diaz, Division Vice President and General Manager, North America Trucks and Light Commercial Vehicles, Nissan North America, Inc. “TITAN will compete in the heart of the full-size pickup segment – the half-ton – while the TITAN XD provides a unique solution for customers by bridging the cost and capability gap between traditional half-ton and full heavy-duty pickups. Between TITAN and TITAN XD, we will cover about 85 percent of the full-size truck market.”

TITAN is built on a separate chassis from TITAN XD, and is approximately 228.1 inches long (14.7 inches less than XD) and 79.5 inches wide (same as XD), with the cab size shared between the two vehicles.

“We’ve said before that even the lug nuts are different from TITAN to TITAN XD,” added Diaz. “What’s important is that these two trucks are serving a completely different type of customer. As the head of Nissan’s light commercial vehicle program in the U.S, I’m thrilled to be getting this truck into the lineup as an option for fleets as well as for the personal use buyer.”

The TITAN will be powered by Nissan’s 5.6-liter Endurance® V8 gasoline engine, producing 390 horsepower. This engine, which will also be featured in the TITAN XD V8 Gas and the all-new 2017 Armada, will be mated to a 7-speed automatic transmission. A V6 gasoline engine will also be available (details to be announced at a later date).

The Nissan TITAN will be assembled in Canton, Mississippi with the 5.6-liter V8 gasoline assembled in Decherd, Tennessee. The truck goes on sale in summer 2016, and pricing will be available closer to its on-sale date.