It’s been several years since Lincoln exhumed the Continental nameplate in glitzy concept form that left the automotive press breathless.

But by the time the production model arrived in 2016, not only were sedans falling out of favor, but the Continental sitting in the showroom had lost some of its auto show shine.  So take a look at what Lincoln is doing to revive the excitement.

Don’t even think about using the word suicide, the 2019 Continental will be offered with center-opening doors; a nod to a largely bygone era of motoring elegance.  Now before you get all excited, Lincoln is only making 80 of these Contis, honoring the Continental’s 80th anniversary. 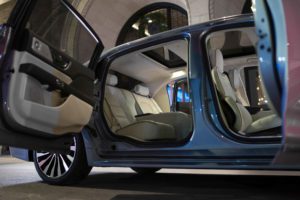 Officially called the Coach Door Edition, it can be ordered now through Lincoln’s uppity Black Label dealers for delivery next summer.

Pricing is currently unknown but for some perspective, a 2019 Continental Black Label starts at $71,040 including destination.

With 6” added to the wheelbase, rear seat passengers should be in for a treat with a 90-degree opening, electric doors, tailored amenities and a pass-through console that offers a stowable tray table with tablet holder and a wireless charging pad.

The Coach Door Edition will be powered exclusively by the brand’s 3.0-liter twin-turbo 400-horsepower V6.