Much of the MINI lineup is refreshed for the 2022 model year.  Including exterior styling tweaks, new wheels, and updates to the cabin electronics.  And as a big fan of this current generation MINI I’ve always kind of wanted a convertible; preferably a JCW but this sharp-looking Cooper S would certainly do. 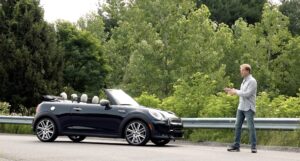 It’s funny when people try comparing MINIs to other cars because it just doesn’t work.  With Fiat’s failed attempt at funky, MINI truly stands alone. And with the backing of BMW, their cars are both premium and fun-to-drive. 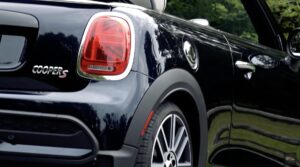 But it’s not exactly a friendly sales environment right now for small cars and as such MINI is struggling to move their 5 models as they await the arrival of a pair of crossovers to bolster their appeal before going fully electric early next decade. 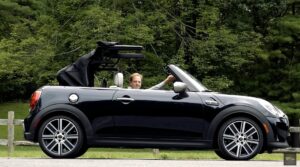 Until then, there are still plenty of reasons to give MINI a look if you’re the kind of driver who appreciates the tenets of this iconic British brand.  Personalization is the name of the game at MINI and building the one that’s just right for you is an exciting endeavor and something that’s tough to find elsewhere for under 6-figures. 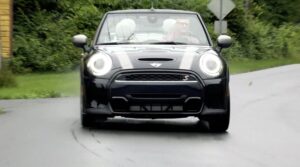 So here I have the Cooper S Convertible with the 189 horsepower turbo decked out in the highest Iconic trim level replete with silver bonnet stripes and the MINI Yours soft top for an as-tested price of $40,850. 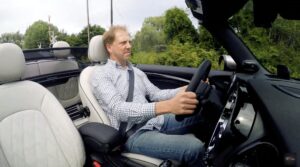 Now, there’s always some sticker shock with the MINIs I test and this one isn’t any different but a less-equipped Convertible can be had for under $29,000.  Though if you go that route you’ll miss out on this blue-ish looking Enigmatic Black paint, these 18” MINI Yours British Spoke 2-tone wheels, my personal favorite interior – Satellite Grey in Chesterfield Leather, and this new Touchscreen Navigation Plus with wireless Apple CarPlay…sorry Android users. 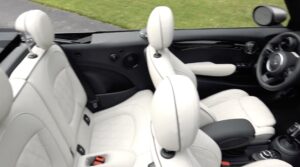 This one also comes standard with a heated steering wheel in a new design, heated seats, power folding mirrors, a head-up display, a Harman/Kardon Premium Sound System and a wind deflector. 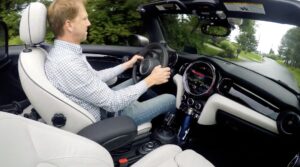 The one possible rub against this Iconic model that favors the base Classic trim is that you can’t get this one with a stick shift – the 7-speed dual clutch transmission is standard.   But it works particularly well with this 2.0-liter turbo, with crisp shifts, steering wheel paddles, 3 driving modes, an additional 3mpgs and a quicker 0-to-60mph time of 6.7 seconds.  There are some fun sounds here too adding to the sporty persona. 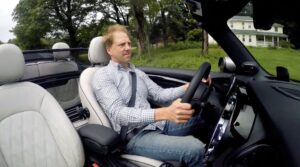 And with summer-use tires clutching the road, snappy steering and a buttoned down suspension this is quintessential MINI driving.

The biggest takeaway from the drive, frankly, is just how stiff it is.  I mean, there’s very little flex in these runflat sidewalls and the suspension tune is already firm to begin with so when you’re driving through rough patches it’s really too much; I mean, borderline brittle.  And personally, I would want the JCW engine tune here because this one needs just a little more power to really catapult it into that sporty-fun realm.  But for mid-level driving with the top down this is a perfect weekend toy with very little wind intrusion into the cabin.  But just remember do not go on a shopping spree when you’re out because cargo room is at a premium. 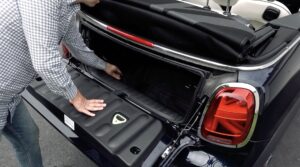 The trunk, or boot if you will, is really small – between 6 and 8 cubic feet depending upon the roof’s position – but I do like the release levers that allow for you to move the convertible top out of the way for easier access.  Also very small and not that usable are the rear seats which tend to work best as extended cargo space and a holder for the windscreen.  But this Union Jack soft top is wicked cool and its operation is completely automatic and beyond that it has a sunroof function that allows for it to be partially opened.  And get this; MINI has always advocated for top down driving no matter the weather and there’s a page in here that keeps track of just that. 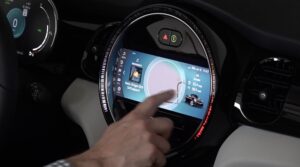 It looks similar and it’s not completely different than before but this touchscreen has been updated to act more like your smartphone now.  But I have noticed that the touches are pretty sensitive and sometimes it takes a few tries to get it to click. And then over here in front of the driver is the new digital cockpit which looks really cool but doesn’t really offer anything extraordinary nor does it allow for any customization which is odd coming from a company that’s all about that. 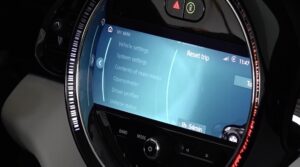 This screen looks like it has more potential but what you see is what you get.  But this display with its unique circular housing and light ring is good stuff and can also be controlled down here with a knob and some buttons.  And then the arm rest doubles as a phone holder and charger with a snap in design which is very convenient in a cabin that hasn’t any other space for such a thing.  But that also means stuff-it space is hard to find. 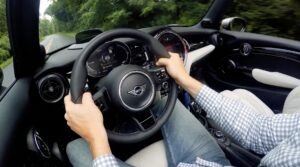 The switchgear keeps its classic design but the steering wheel has new buttons.  Still no side blind zone alert which is hard to believe and before you think it’d be useless on such a car think again…with the top down rearward visibility is very tough.  The $750 Driver Assistance Package which this car doesn’t have includes Active Cruise Control and a Parking Assistant but nothing for your blind spots. 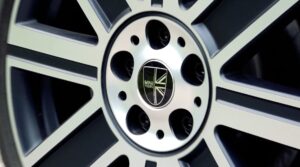 The new design cues are relatively subtle but bring an updated appearance all around.  The fog lights are gone and the side scuttles have been freshened; it’s still instantly MINI but it has a slightly tougher, more masculine appeal.  The Union Jack taillights and dual exhaust also lend detailed elements that give the MINI a premium touch.  I love how this one is spec’d but if you prefer white or black bonnet stripes, different color side mirrors, various interior trims, leather choices or one of a number of vibrant exterior hues they’re all available.  Shoppers can make these little cars their own and that’s a big part of the MINI charm. 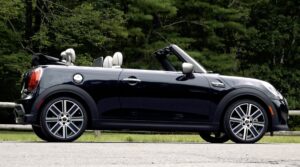 The turbo’s punchy 206 pound-feet of torque and frisky front-wheel drive chassis combined with 30mpg and lots of creature comforts make for a sensible weekend toy that won’t take up much space in the garage.  Last year, almost 1 in every 5 MINIs sold in Germany was a convertible and it remains a popular choice here in the States and Britain.  Because of that MINI has already announced the Convertible will live into their electrified future with a new model scheduled to be unveiled in 2025.