The Mazda3 has the hot hatch look but until now it was all for show. 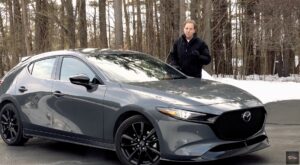 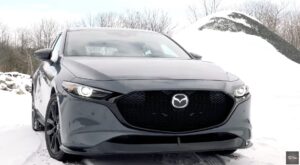 Micah Kanters, the little kid from the Zoom-Zoom ads, is now 31 years old.  Let that sink in for a minute.  And I mention this only because Mazda is in a much different space then they were back then.  Today, their sights are set on the premium German and Asian brands as they try to rise above the perception as a secondary, Japanese manufacturer of inexpensive small cars. 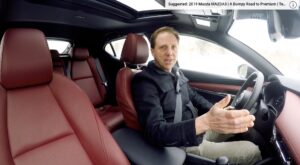 Which is why I’ve been so pleased with this little guy; a car I’ve previously been ambivalent about has been given renewed life with a turbocharged engine.  Feed it premium gas and it’ll reward you with 250 horsepower and better yet, 320 lb-ft of torque. 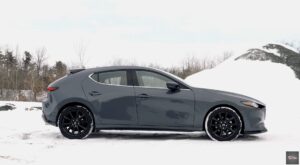 That’s a huge 72% gain compared with the non-turbo 3 and it peaks much sooner.  To mitigate torque steer, though there’s still some, the power goes down to all 4 wheels via a 6-speed auto, which seems a little light in today’s gear crazy world.  It’s offered in both the sedan and hatchback body styles, but it’s this more expensive and expressive 5-door where it fits best.  It’s exclusively available with this attention-grabbing Polymetal Gray paint and 2 different Aero Kit options imbuing it with the look of something spunky. 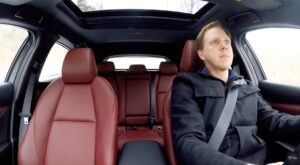 This here is the top trim Premium Plus model which adds real leather, navigation, a 360 degree camera with real button, traffic sign recognition, and myriad other driver assistance features. 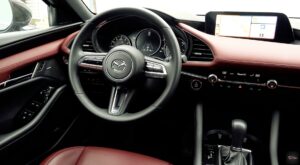 Plus, you get the front air dam, gloss black roof spoiler and larger tail pipes.  As tested, you’re looking at $34,820.  The cost of the turbo and all-wheel drive adds about $3,000.  Gas mileage does take a 3mpg hit, rated at 26mpg in combined driving, thusly reducing the total range to 330 miles and if you want those advertised power numbers premium gas is a must otherwise they’re significantly reduced. Oh, and there’s no manual option here which, in this particular case, is a shame. 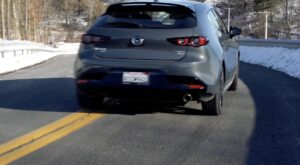 I’ve been a little disappointed with the newest Mazdas.  Transitioning to a premium brand, their cars have left me longing for the zoom-zoom days.  But adding this turbo to the 3’s willing chassis makes this the Mazda we remember and then some because, let’s face it, they’ve almost always been driving rich but power poor.  Mix in all-wheel drive and big torque output and suddenly the 3 is a very entertaining drive with plenty of hot hatch spunk and a loveabley safe toassability. 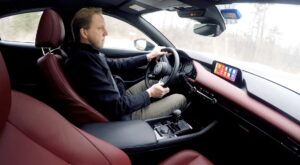 That being said, I still think Mazda gets a little too cute with their Skyactiv and G-Vectoring Control programming which adds a layer of artificial feel. 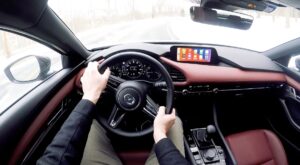 What we’re talking about here are electronics that primarily affect the automatic transmission – well intended, no doubt, but ones that can give this car an on or off feeling that’s not unlike one pedal driving in an electric car.  Sometimes it feels as though there’s a force holding the car back unless you’re always on the throttle. 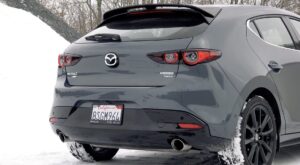 I’ve mentioned this in my previous reviews and it is slightly less noticeable with the turbo but it’s best alleviated in Sport mode when you want to hold lower gears anyhow. 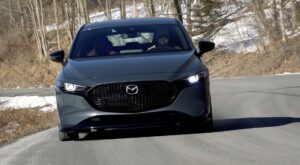 No trick all-wheel drive system – though it is capable of more rear drive torque than before-  or even an independent rear suspension which does ding the ride quality and less so the handling, but nevertheless this car really goes and can be a truly fun drive if not particularly sophisticated. 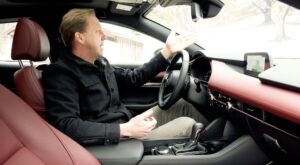 The seating position is low but the forward visibility is good, the steering is light and precise and the turbo’s power delivery is more linear than you’d expect.  There’s even a little bit of sound here to go with it.  There are paddles if you want them but the transmission in general is this car’s weakness.  A stick would be nice.

Have I told you how much I dislike the aggressive automatic parking brake that can’t be overridden from one drive to the next? Otherwise, the cabin is easy going and straight forward and despite the tight appearance, the rear seats are actually adult-friendly.  And of course, it’s a hatch so you get more cargo room than in the sedan.  But if Mazda is really interested in its premium pursuits they have some work to do with certain material selections and a lack of features such as rear vents or USB ports.

Where Mazda comes in strong is in the driver assist arena where auto high beams, Traffic Jam Assist, driver attention monitor and rear cross traffic alert are all here and then some.

The new turbo 3 hatch is the most fun I’ve had behind the wheel of a Mazda in some time and with this engine in the new CX-30 Mazda will really be making hay.