The words Hybrid and Toyota are practically synonymous, with the groundbreaking Prius as the foundation.  Even though gas prices are relatively cheap 52mpg sounds pretty good to just about anyone and the all-new Corolla Hybrid delivers just that in a more mainstream wrapper at a less expensive price. 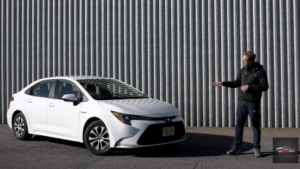 It’s interesting; Toyota offers 6 of their models in gas-electric hybrid form – same as their Lexus luxury division – which is far more than any other automaker.  But a full-blown plug-in electric?  Not a one. 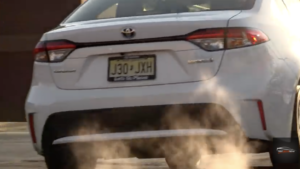 Which goes to show you that Toyota isn’t drinking the EV Kool Aide…at least not yet.  In their eyes, the pairing of gas engines and battery-powered electric motors is the best solution for now. 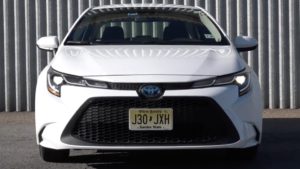 Their latest car to receive the 2 motors 1 engine hybrid treatment is the all-new Corolla – a sharp-looking, compact sedan with Prius genetics. 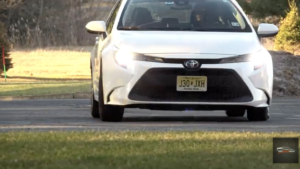 As a matter of fact, the Corolla’s pairing of the 1.8-liter 4-cylinder and electric traction motor delivers the same 52mpg in combined driving as the Prius and even bests it on the highway by 2mpg. 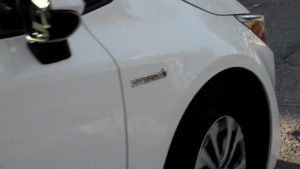 That’s 44% higher than the most fuel-efficient Honda Civic 4-door and it provides a nearly 600 mile driving range reducing annual fuel costs to an average of only $750. 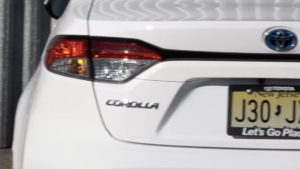 It’s even priced $1,100 below the Prius with an MSRP of $24,055 including delivery.  But there’s a bit of a catch; every Corolla Hybrid is the same with the exception of colors. 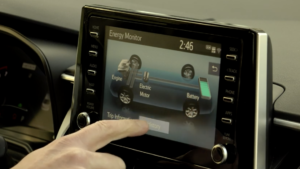 There are no packages or options available and the LE trim level can leave you wanting, especially if you’re into things like a sunroof, satellite radio, Android Auto, a height adjustable passenger seat, or blind spot detection – an embarrassing omission from Toyota Safety Sense 2.0. 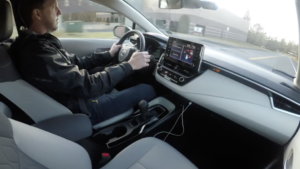 And there are other little cost saving moves like a Walmart-quality 6-speaker stereo, floppy rear armrest and lack of console mounted rear seat vents.  Individually, most of these items aren’t a big deal but there is a cumulative effect plus, if you look at the Hyundai Ioniq you’ll see it offers all of these things at a lower starting price with better MPGs in a significantly more spacious package. 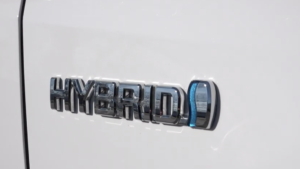 This new platform which underpins a number of recently introduced Toyota models receives high marks for its solidity and sprightly-tuned chassis.  The hybrid experience waters that down some but at the Corolla’s roots is a really well-engineered car. 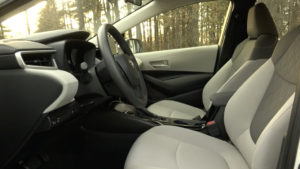 ECO mode is far too sedate but Normal and Sport settings provide a torquey zip to the drive which incorporates a good deal of pure electric motoring as long as you ease into the go pedal.  The continuously variable transmission doesn’t enhance the experience but it also doesn’t ruin it.  Total output of 121 horsepower is subsidized by a quick first step which is perfect for city driving where the Corolla is most efficient.  It’s nimble and fun-to-drive in a hybrid kind of way with notable ride comfort. 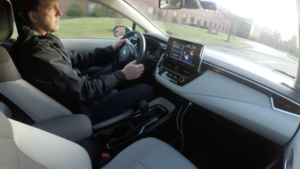 It also proved to be a good snow car where these skinny 15” low-rolling resistance tires didn’t plow and kept good traction.  However, the Prius is now offered with all-wheel drive – the Corolla is not. 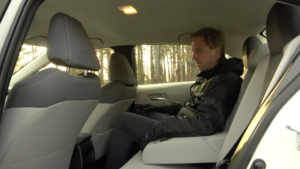 Here’s the thing; the Corolla makes for a really good hybrid.  The stellar mileage is real and consistent, it’s not compromised for space and I like the way it looks.  But the basic concept of a hybrid kind of feels passé at this point.  It’s nickel-metal tech in a lithium-ion world…the powertrain characteristics, though not terrible, are the biggest turnoff.

The cabin is simple yet attractive, the battery is tucked under the rear seat so it doesn’t eat up trunk space, even allowing the seats to splitfold, the touchscreen is basic yet intuitive, the gauges are elaborate with ways to measure your efficiency and watch the power flow – one of my favorite things to do while driving a hybrid, and the safety tech includes auto high beams, dynamic radar cruise control and lane departure alert with steer assist.  The seats are comfy and it feels roomy.  I just wish Toyota would offer the Corolla Hybrid with more options but there’s no denying its appeal to those prioritizing gas mileage, low price and the Toyota badge.