Cadillac’s car lineup has been reduced to 2 all-new models, the compact-sized CT4 which I drove earlier this year and this; the midsize CT5, both available in mid-performance models Cadillac refers to as V-Series. 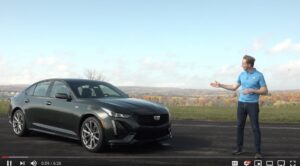 You really can’t fault Cadillac for this strategy; all of its German rivals have been doing it for years.  Give shoppers a taste of the summit at a price that’s more medial. 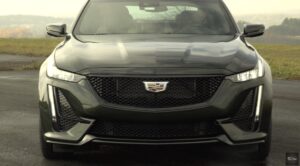 And when analyzed closely, the CT5 V-Series is actually more than just a nibble at performance; this car has a serious menu. 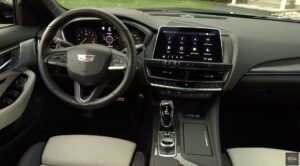 With a twin-turbo V6, MagneRide suspension, Brembo front brakes, an electronic limited slip differential, V Drive Mode, Launch Control and Performance Traction Management, this V-Series injects enough raciness into the CT5 to satisfy all but the most demanding drivers.  And for them, the Blackwing variant arrives next summer. 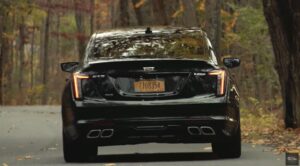 At a cost of $2,000, this one is also equipped with all-wheel drive though with these standard summer-use only tires you’ll need an additional set of rubber for the snow. It feels fairly sizeable with nearly identical dimensions to the BMW 5-Series. 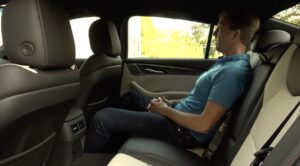 That means real backseats and a trunk capable of family adventures while the driver plays with the 360 horses and 405 pound-feet of torque from the 3.0-liter engine. 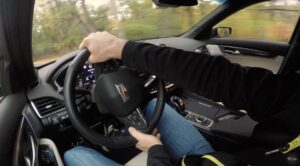 A 10-speed auto handles the gear changes while various drive modes are accessible via a somewhat inconvenient, sequential switch just fore of the new age shifter.  And the span of said modes is quite impressive ranging from snow and ice to track, with an all-encompassing approach to chassis and powertrain adjustments. 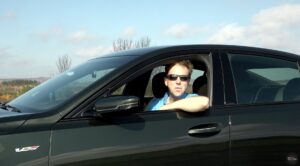 And if none of them perfectly fits, there’s also the configurable My Mode and a more comprehensive V mode, the latter activated by a switch on the steering wheel. 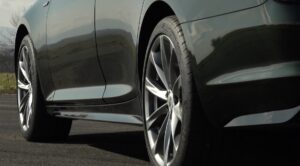 And unlike the CT4-V, this one has an exhaust system that makes some noise – not necessarily lovable sounds, but they are selectable from stealth to snap, crackle and pop. 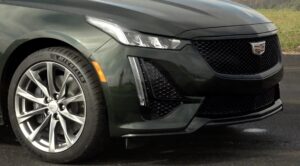 Regardless, there’s always a constant burble which turns into groaning at light load and then crescendo’s to something worth hearing at higher rpms. 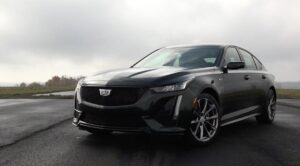 Though I can’t imagine it would be terribly fun based upon its size, weight and a less than willing transmission, Cadillac has equipped this CT5 to be driven on a track as long as you follow myriad procedures lest you risk your safety and your warranty.  For what it’s worth, my best 0-to-60 mph time has been 5.2 seconds which sounds about right.  Caddy claims 4.9 for the rear-wheel drive model.  With active fuel management and start stop, gas mileage is rated at 20mpg with a smallish driving range of 340 miles. 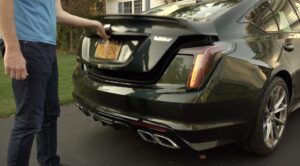 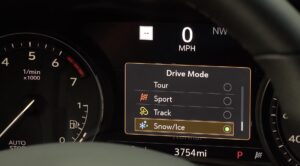 This setup provides 5 sub-settings depending on track conditions and driver skill level to achieve the smoothest and most consistent corner exit. 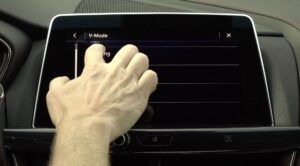 I’ve had the chance to experience this innovative programming in other GM models and it’s interesting to note that even the Vette I recently tested didn’t include it as standard so chalk up one for the Caddy. 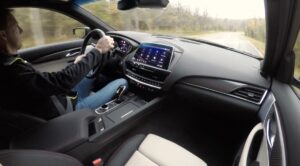 Ditto for the Magnetic Ride Control shocks which are now up to version 4.0 though somehow don’t feel quite as forgiving as before.  The seats include adjustable side bolsters but the CT5-V never comes across as a car you’d necessarily take out for the sole purpose of driving for fun. 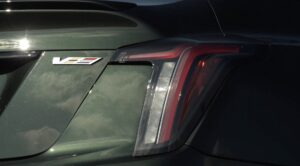 I really like the effort here. It feels like this is a solid middle ground between the 2.0 liter engine and the upcoming Blackwing. But just like my CT4 V test this isn’t a love at first drive experience. It’s not until you’re pushing it hard that you can really begin to appreciate the car’s performance benefits. Its resume is solid, the pipes sound good and I love the design, especially in this Evergreen Metallic Paint. 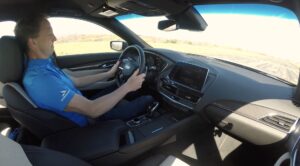 But there’s one attribute that gets in the way of true enjoyment and it’s the steering. First, the wheel is too big and secondly it requires far too much effort in any mode. It gets tiring after a while. And then to a lesser degree, the transmission can be slow to shift, especially when using the paddles. 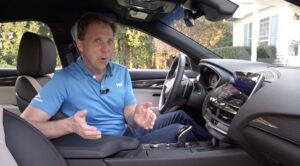 Those are this car’s bugaboos, for sure and make this CT5 feel more like a lowercase V. 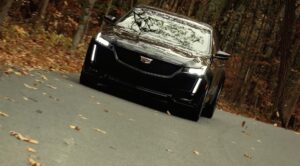 As for the CT5-V’s role as a luxury sedan it has some highs and lows.  The Beige/Black leather interior looks great.  There’s approach lighting and a neat opening animation.  The touchscreen infotainment with navigation is loaded with apps and other useful info, the front seats have partial massage for the lumbar area and extendable thigh support, there are automatic heated and cooled seats and a heated steering wheel, performance gauges and time recorders and a head-up display with customizable content.  The safety alert seat and teen driver features are cool and remote start is always a plus.  But the Chevy TrailBlazer I tested recently had adaptive cruise control and wireless CarPlay and Android Auto so how is it this Cadillac doesn’t?  The former is available in a package and the latter not at all. 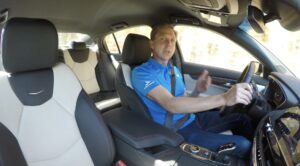 At $58,305 as-tested the CT5-V is significantly cheaper than a 540i xDrive or E450 4Matic but it pulls out of my driveway at the end of the week leaving very few lasting impressions.