It’s Super Bowl week in Miami so a GMC just wasn’t going to cut it this time around.  And is there a more fitting accessory for this vivacious party scene than 007’s whip? 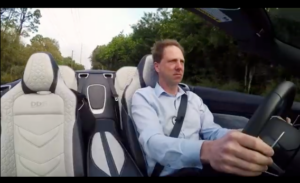 I think not.  Excluding their limited production hypercars, this is the most expensive, most powerful, fastest Aston Martin the British automaker currently sells.  Passing the torch as Aston’s finest grand touring car from the Vanquish S, the DBS nameplate was revived for this all-new model in 2018 along with the super lightweight moniker.  And then last year the convertible Volante  was added. 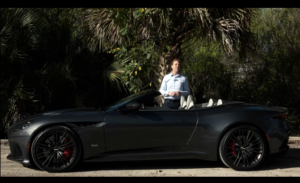 The 5.2-liter twin-turbo V12 sits low and deep under the carbon fiber bonnet, as the British like to call it, and produces 663 pound-feet of torque.  This cool looking Gold Pack is optional.  Now, whether you pronounce it Superleggera like the Italians or Superleggera, it means super lightweight which translates here to 4,100 pounds dry. 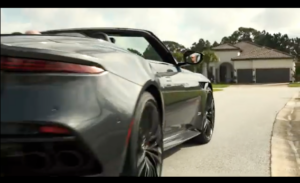 That makes it lighter than the all-wheel drive Bentley Continental GT and bests that car in most of the critical measurements of awesomeness, including appearance, if you ask me.  Driving the 21” rear wheels fitted with $500 a piece bespoke Pirelli rubber is a new rear-mounted 8-speed auto.  So with its massive 715 horsepower racing to 7000 RPMs while bellowing sounds that could wake the dead, this DBS can absolutely shred these pricey P Zeros so watch yourself when you command the throttle. 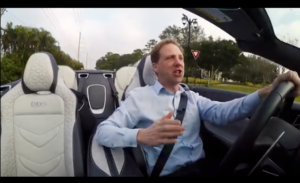 I haven’t turned off traction control but I can only imagine the smoky drifting that would ensue if you did.  The Drive Mode switch is right on the wheel as are the individual shock settings. 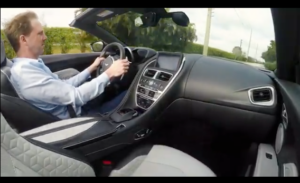 GT mode is relaxed and compliant while Sport and Sport Plus dial everything, including the sounds, up to 10.  Still, the DBS never feels punishing though highway driving can be droning even with the top up.  Unfortunately, curvy roads are foreign to Florida so I’ve had to extrapolate the DBS’s handling traits from the few opportunities I’ve had to actually turn the wheel but I will say this – despite the 50:50 weight distribution the DBS reminds me in some ways of a Corvette in that it would definitely take some time to establish trust in the machine’s resume and learn how to tame it safely on public roads.  The carbon ceramic brakes are standard and play friendlier than most with less grabiness and no squeaks.   While its 17mpg rating is pretty impressive stuff. 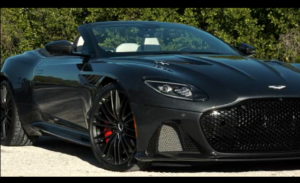 Priced from over $330,000 and offered with numerous customization options, this DBS is ultra-exclusive.  Open the swan wing doors and the cabin’s quilted seats and copious carbon fiber trim make a striking impression.  There’s even a motorized center console cover. 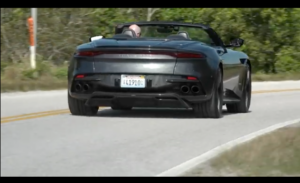 But I’m surprised by the lack of modernity in here – even from an exotic car maker – exemplified by old Mercedes infotainment, dated graphics and curious ergonomics.  Even the roof’s operation is a bit clumsy and stuff it space is severely limited.  And you’ll need these useless rear seats for cargo room because the trunk, or boot if you will, is especially small.  All that being said, it’s comfortable with the top down even for longer journeys as a good GT should.   I do like how you can fire ‘er up in a quieter mode by holding down the start button otherwise the neighbors would hate you. 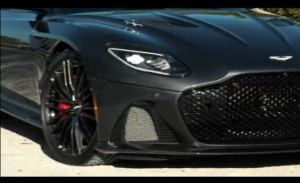 With an influx of cash from a new minority stakeholder and the brand’s first SUV due later this year, Aston Martin has a shot at turning things around.  In the meanwhile, it’s fun to live the James Bond life…if only for a few days.