Though you might not think of Honda as an off-road kind of company, fact of the matter is that their all-wheel drive system is legit and vehicles like the Ridgeline and Pilot have the ability to find traction where others struggle. 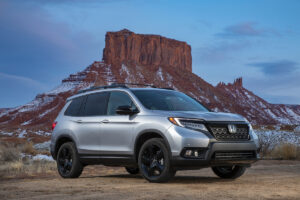 So in swaggers the all-new 2019 Passport; designed for adventure-seekers who want superior off-road capability.

While the compact and 3-row SUV segments are teeming with entries, the more traditionally sized 5-passenger group has recently been neglected but is gaining steam once again.  And that’s where Honda slots the Passport; between the smaller CR-V and family-sized Pilot from which it is based.

Though a front-wheel drive Passport can be specified, it’s those equipped with torque-vectoring all-wheel drive that stand-out on the trail.

With Snow, Mud and Sand drive modes, a wider track, increased ride height and more aggressive approach and departure angles than the Pilot, the Passport encourages drivers to go off-road.

Honda’s i-VTM4 all-wheel drive system works to send power to the wheels that have the most traction in off-road conditions, unlike some AWD systems that can leave low-traction wheels spinning.

Even when one wheel is off the ground, i-VTM4™ sends power to the wheel that has contact to pull the Passport through and ensure momentum. This setup also improves cornering power in on-road conditions.

hough sharing the Pilot’s wheelbase, the Passport is 6” shorter for easier maneuverability on the trail.

Powering the Passport is Honda’s tried and true 3.5-liter V6 connected to the next generation 9-speed automatic transmission.  Power is rated at 280 horses and 262 pound-feet of torque affording up to 5,000 pounds towing.  Expect 21-22mpg in mixed driving.

Pricing starts at $33,000 for a 2-wheel drive Passport Sport while EX-L, Touring and Elite trims are available, topping out at around $45,000.