There are a lot of excellent small crossovers on the market with all different kinds of powertrains but if it’s a hybrid you’re after, well there are only a couple of players. This here is one of them – the new gas-electric Toyota RAV4.

In light of the recent slump in gas prices, hybrid sales have taken a dive. But Toyota hasn’t thrown in the towel on using electric motors to boost fuel efficiency from internal combustion engines. As a matter of fact, this RAV4 brings the number of Toyota hybrids to 8. Their Hybrid Synergy Drive as it is called combines output from a hybrid-tuned 2.5-liter 4-cylinder gas engine and a pair of electric motors located within the transaxle. The front wheels are driven through a continuously variable transmission…not the conventional belt and pulley type but an electronic version used in hybrids, though with the same shift-free feeling and associated pros and cons. 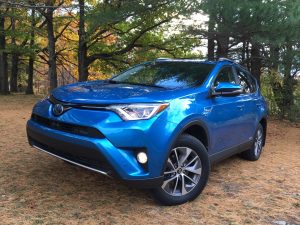 All RAV4 Hybrids come standard with all-wheel drive, but it’s a different take on 4 wheel traction than the gas models, utilizing an electric motor on the rear axle.

There’s a dual benefit to all of this: the first, of course, is better mileage where this RAV4 bests its gas-only counterpart by 28% in combined driving. And secondly, it’s more powerful with net system output of 194 horsepower and 206 pound-feet of torque leading to a 0-to-60mph time of 8.1-seconds…nearly 1 second quicker. It acts very much the hybrid with moments of electrified quietness, on and off cycling of the gas engine, sneaky fast take-offs, the unique sensation of regenerative braking and the occasional unpleasant sounds of a transmission without fixed gear ratios. The nickel-metal battery pack resides back here, but it’s packaged cleverly enough so as not to interfere with cargo volume by more than a couple of cubic feet. It weighs 320 pounds more but rear seat room and cargo volume are both generously sized plus with the flat floor, you can more comfortably seat 3 across. The height adjustable power liftgate though is slower than slow. It also can tow 1,750 pounds…that’s an additional 250 lbs.

Introduced for the 2013 model year, this current gen RAV4 has never been much of a looker but the 2016 refresh has brought about a bolder, more attractive appearance and the addition of this flashy Electric Storm Blue paint option. I like its stance, riding on 17” Yokohama all-seasons with new silver skid plate garnishes but with just over 6” of ground clearance you’d better tread lightly. The all-wheel drive system relies on a 67 horsepower motor generator at the rear wheels when added traction is called upon though there’s no locking mechanism nor does it possess the Dynamic Torque Control function of the gas model which offers more sophisticated handling. There are selectable driving modes, even a pure EV setting for very short, slow periods of time. My gas mileage for the week has ended up right at the 33mpg EPA rating…pretty impressive. And though there’s a Sport mode that adds a kick of excitement, the RAV4 Hybrid isn’t at all interested in sporty driving.   Ride quality is generally pleasing for comfort though it lacks sophistication over the rough stuff.

There’s more power here…the torquey electric type that drivers’ will appreciate and the steering has a direct feel that you don’t typically see in this class. The seats are very kind to your lower back and driver assistance features like adaptive cruise control help reduce driver fatigue. But it’s pretty loud in here, the hybrid powertrain makes dreadful sounds under hard acceleration and the cabin feels less than quality driven. 33 mpg is legit but the RAV4 Hybrid as a whole I’m not completely sold.

The far-reaching Convenience Package adds about $2,000 to the price but adds just about everything you want including the Blind Spot Monitor and Rear Cross-Traffic Alert, front and rear parking sonar, and the Entune Premium Audio system with navigation, apps, and all kinds of music choices. The Toyota Safety Sense P suite of advanced safety features, including a Pre-Collision System with Pedestrian Detection, Auto High Beams, Lane Departure Alert with Steering Assist and Dynamic Radar Cruise Control is now standard across the board.

With a starting price of $29,970 for the entry-level XLE Hybrid and priced here at $32,538, the price premium is a modest $800 for what the EPA estimates will save its owners $1,250 in fuel costs over 5 years. Until the Nisan Rogue Hybrid arrives, the Toyota RAV4 gives small crossover shoppers seeking greater MPGs a reasonably likable offering.