In the Lexus lineup, there are 2 models that raise the ante in terms of track-tuned performance and in each case they boldly end with the letter F. As opposed to the more plebian F SPORT, Lexus F models are the real deal.

Take this 2017 RC F, for example.  Fitted with a mean sounding, 467-horsepower 5.0-liter V8 and sculpted lower, wider and longer than the regular RC Coupe, the RC F has been developed to excel on the track as well as the road.  Body rigidity, suspension, brakes, tires and all other systems were developed to withstand the rigors of a track day event. 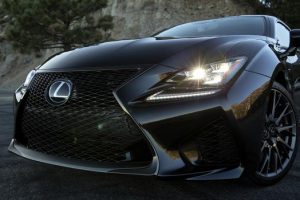 Now in its 3rd model year, the 2017 RC F receives a new adaptive variable suspension which controls damping force with more precision.  It’s been tuned on the most famous road courses in the world to improve steering during cornering and better body roll stability.  Additionally, Lexus says the F-tuned AVS enhances ride smoothness during acceleration and deceleration.

Other new goodies for 2017 include Scout GPS Link – a smartphone app that projects navigation onto the car’s central display screen, a sportier 19” forged wheel design and this Caviar exterior color.  A limited-slip differential is standard for more bite exiting a corner while a torque vectoring differential is optional, replete with 3 selectable settings to more precisely distribute the engine’s power between the rear wheels.