When you ask a non-car person what kind of vehicle they drive they usually just give you the make or if you’re lucky perhaps even the model. But as you know, that only tells half of the story. Like if your buddy tells you he bought a new Mustang, period. If it’s an EcoBoost model you nod respectfully. But if there’s a snake on it, well that elicits a much stronger reaction. When you own the GT350 you have the Mustang.

Fastback or convertible, manual or automatic and the choice of 4, 6 or 2 different 8-cylinder engines, Ford has Mustangs that cater to a wide-ranging audience. But this Shelby GT350 introduced for the 2016 model year takes the pony car idea to a higher level of sophistication. Born in 1965, it’s a nameplate steeped in history, originally intended to transform a great every-day car into a dominant road racer. Ford says this modern interpretation is the most balanced, nimble and exhilarating production Mustang ever and you certainly won’t get any argument from me. 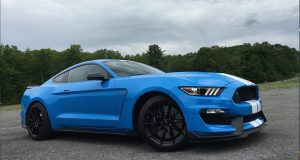 If you waited for the 2017 model year to purchase a GT350, lucky you. This incredible Grabber Blue paint is new this year and all of those previously bundled must have Track Package items are now standard. That means you get the oil, transmission and differential coolers, continuously controlled dampers, strut tower brace and decklid spoiler included in the base price of $58,345 which includes a gas guzzler tax. Good luck finding a dealer who’ll sell you one at that price, however.

Typically, an engine’s crankshaft doesn’t grab the headline but what makes this new 5.2-liter V8 in the GT350 particularly interesting is that it uses a flat-plane crank, an arrangement preferred for its light weight, lower center of gravity and high-revving characteristics. But because its firing order alternates between cylinder banks potentially causing an imbalance and thus vibration, it’s use is typically reserved for racing applications where such attributes are tolerated. Not only does it have a distinctive sound all its own, but this Ford-engineered V8 is very well –mannered and not at all hampered by roughness. Thanks in large part to this flat-plane crank design; this 5.2-liter motor has a sky high 8,250 RPM redline and a tall 12.0:1 compression ratio. Fed by a cold air intake, its 526 horsepower peaks at 7,500 RPM while its 429 pound-feet of torque is maximized at 4,750 RPM, premium gas please. And gas mileage is not its strong suit, rated at a measly 14mpg city/21mpg highway. A lightweight Tremec 6-speed manual is the only transmission.

After getting used to this long travel clutch pedal with its somewhat tricky engagement, the GT350 uses its solid-acting short throw shifter to beautifully conduct this high-revving V8. There’s so much engine with which to play. The MagneRide dampers keep things compliant in normal mode but these ultra-wide Michelins groove pretty good so pay attention and keep 2 hands on the wheel. It’s these tires though that keep this Mustang superglued to the road to the point where it can literally tear up the asphalt.

With a line lock setting to warm up the steamrollers, launch control and even a Drag Strip mode, this Mustang can go though it’s not crazy fast off the line. 4.3 seconds is certainly nothing to sneeze at with a quarter mile in the mid 12s but this Pony was built with racetrack-inspired handling and a wide torque band suited for things other than taking off quickly. The GT350’s personality completely changes when you switch from Normal to Sport mode – the best selection for on-road fun. The dual –exhausts clear their throats with a roar that’ll wake the neighbors, the very direct steering becomes even more go-cart like and the suspension gets even firmer. Public roads merely foreshadow the capabilities which lie within. With the state of the art Michelins and a limited slip differential the GT350 adheres to the road like few other cars I’ve ever driven and the absolute stopping power is astonishing. It feels beefy from behind the suede wrapped steering wheel with its bulging carbon fiber composite grille looming out ahead but even at 3,800 pounds it feels as balanced and eager as something much smaller. If lots of track time is in the cards, Ford recommends further aftermarket upgrades to keep the mechanicals in good working condition.

Getting in and out is a challenge, made difficult by the highly sculpted Recaro seats – no height adjustment on the passenger side, mind you. A number of switches perform the electronic tasks related to performance and the information display is chock full of detailed instrumentation and performance measuring tools. My tester has the optional $3,000 electronics package replete with SYNC3 and all of its connectivity goodies plus dual zone climate control and other bits. The further optimized GT350R makes the rear seat optional which makes sense based on its subcompact dimensions. There is a backup cam but no size blind zone alert.

As I wrap up my week with the GT350 I’ve got some parting thoughts. I’ve driven dozens of Mustangs over the years but none as hardcore as this. It’s not the friendly daily driver type, you’ve got to have some serious performance needs to go all the way to up GT350 in the Mustang lineup. In many ways it reminds me of the last Camaro Z/28 I drove…it’s basically a street legal track car. An attention magnet with high performance driving dynamics and the loudest voice I’ve heard since the Lambo test-drive.

Stickered here for $61,820, the ultimate factory-built Mustang is the car you’d never thought it could be.