A design revolution is occurring at GM’s premium Buick brand, starting with the all-new 2017 LaCrosse – a midsize sedan that battles the Lexus ES and Lincoln MKZ. 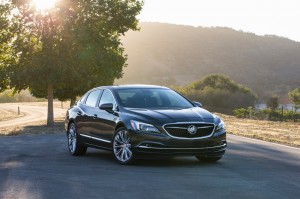 Borrowing cues from the recent Avenir concept, this LaCrosse is longer, lower and wider while proudly displaying the return of the 3-color Buick tri-shield insignia.

Powered by GM’s next generation 3.6-liter V6, the LaCrosse benefits from new fuel saving technologies such as cylinder deactivation and Stop/Start.  It’s rated at 305 horsepower and 268 pound-feet of torque.

A new all-wheel drive system is optional, adding torque vectoring across the rear wheels for better performance during acceleration and cornering.  Buick’s hallmark sumptuous ride quality is emboldened by a new rear suspension, the use of HiPer Struts in the front and available Continuous Damping Control with Touring and Sport modes.

Having sold more than 900,000 units globally since its debut in 2009, this all-new take ratchets up Buick’s luxury intentions.