So 7-passenger seating sounds like something you’d like but traditional 3-row pricing…that can be a turnoff. If you’re shopping for an SUV on a budget the updated 2016 Mitsubishi Outlander brings a unique skill set without the sticker shock.

This current generation Outlander has been around for 3 years now – the same time as my last test-drive of one. And though you can spec one with 2-wheel drive and a 4-cylinder engine, this range-topping GT with standard all-wheel drive is the only Mitsu powered by a V6. Its 3.0 liters of displacement makes it a size rarely seen among gas engines these days, paired with a 6-speed automatic programmed for optimal fuel economy that transmits the MIVEC’s 224 horsepower and 215 pound-feet of torque to all 4 wheels.   Power dense it certainly is not, but the frugal Mitsu shopper will appreciate the 20mpg city/27mpg highway rating. Unfortunately, it’s penchant for premium unleaded has not changed.

Mitsu says there are over 100 improvements to this 2016 model, the most obvious of which can be observed in its new skin. Shedding its bizarre, appliance-like grille, the Outlander now sports the brand’s “Dynamic Shield” front design concept along with redesigned front fenders, LED running lights and headlamps, 18” wheels, updated rear fascia with LED taillights and power-folding side mirrors. I must say, the look is a winner, especially in this Rally Red paint. 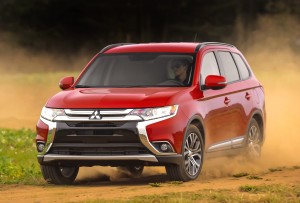 Yes the transmission is still a little too eager to upshift; sometimes giving the engine an on/off persona when climbing grades, but the steering feel and the suspension movements over big road anomalies is more refined. The cabin is much quieter now and the ride quality is smoother than before helping offset the lesser nuanced deficiencies of the drive.

The Outlander is a tweener, meaning it’s bigger than the CR-V crowd but not as large as the Highlander types, giving it a unique position in the small SUV segment, most closely related to the Kia Sorento. The 3rd row is much more accommodating than I recalled, though getting to and from that spot requires some serous dexterity. The elevated 2nd row seats splitfold, slide and recline via a 3-step approach that no longer requires removing headrests to create a flat floor but the 3rd row seats still do – making you stow these ridiculous things in an underfloor cubby. Still, the layout is versatile if not a bit convoluted.

More soft touch points have been added, there’s a new steering wheel, improved seating surfaces and headliner and an updated navigation system. The Mitsubishi Multi Communication System as it is called doesn’t possess things like Siri Eyes free, Apple CarPlay or Android Auto, but there is Sat and HD radio, weather forecasts, speed limits and a host of in-depth trim computer data. And the Eco theme is prevalent throughout with everything from growing leaves on a tree to depict efficiency-minded driving to Eco modes for both the transmission and the all-weather control system, as Mitsu refers to it. There are huge paddle shifters that engage Sport mode but you have to do the shifting…there’s no auto mode for that…and a button on the console toggles through various 4-wheel drive settings for the most appropriate setup. And this is an area where the Outlander has a leg up on the competition, with 8.5” of ground clearance it can confidently handle more than just the occasional dirt road. Plus, torque vectoring across the front axle aids in dry road handling which isn’t overtly sporty but certainly capable enough.

Here’s the bottom line on the Outlander. If you’re the type who always needs the latest device or who is particularly brand conscious then you’re not going to end up here. Mitsu is the smallest of the small Japanese players in the U.S. market without much of an R&D budget and there’s a lot of discount engineering going on here, some of which will have you shaking your head like only Mitsu can. But I have to admit, this GT model has served me and my family quite well this week with its attractive styling, quiet cabin, flexible design and decent gas mileage.

Attention to aesthetics and fine details are points not yet grasped by Mistu but for $35,240 fully loaded, the Outlander GT provides modern touches like Forward Collision Mitigation, Adaptive Cruise Control and Lane Departure Warning…inexplicably there’s still no side blind zone alert.

Soon to be joined by a plug-in hybrid variant, the Outlander is Mitsu’s rising star in a lineup filled with question marks, with sales up 80% so far this year. Bargain shoppers can rejoice.

CLICK HERE to get a FREE ONLINE PRICE QUOTE for your next NEW CAR from a dealer near you. Absolutely NO OBLIGATION.