Looking to escape the buttoned-up, executive sedan crowd with something a little more eccitante?  Then it’s time to brush up on your Italian and check out Maserati’s racy alternative, the Quattroporte.

By the end of this year, Maserati hopes to have about 130 dealerships in North America where annual sales are forecast to rise significantly to about 20,000 units based on the arrival of the brand’s first SUV – the Levante. The mid-sized Ghibli is the new entry-level Maserati with a starting price of about $80,000. Ture sports car enthusiasts migrate toward the GranTurismo and then there’s this: the Quattroporte, Maserati’s flagship car. Originally introduced in 1963 and existing in its current generation since 2013, this 2016 model arrives on the precipice of a major freshening for the 2017 model year. There are 3 trims of this 4-door Ferrari if you will; the rear-drive S and all-wheel drive S Q4 with twin turbo V6 power and the extra brawny rear-drive GTS with a twin-turbo V8. 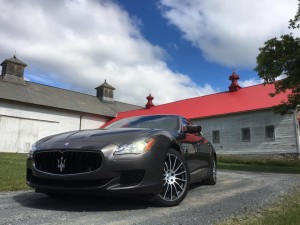 I’ve got the S Q4 with an all-wheel drive system engineered to preserve the typical rear-wheel Maserati driving experience, capable of moving up to 50% of the power to the front end when grip is lost in the back. A Maserati-coded algorithm processes a plethora of vehicle parameters to create a dedicated grip profile for each single wheel. Fitted with the optional 20” all-season tires and the Increased Control & Efficiency mode of the 8-speed automatic transmission, the S Q4 can be your snow day friend.

A sensuous body with prominent Trident badging, quad exhaust outlets and optional 20” GTS wheels are subdued by the choice of this Grigio Maratea paint. To my surprise, this car flew under the radar all week. Well, I should clarify that; when it was parked or in traffic, that is. For those lucky enough to hear the full Sport mode assault of this 404 horsepower 3.0-liter V6, there’s immediate recognition that this is something very special. With a turbo for each bank, the S Q4 overcomes its sizeable 4,233 pounds to swiftly put away 60mph in 4.8 seconds with a top speed of 175…not quite up to Joe Walsh standards.

You don’t fully appreciate the Quattroporte until you’re sitting in this seat. When at that moment this car’s reason for existence comes into focus. I don’t recall ever driving a more enthralling big sedan. Every aspect of this car is as tight as a drum, from the leather on the seats to the chassis that never quivers. And the Ferrari built V6 is special both in its immediacy and even more so in its sounds. You only get a small taste of that from inside but for onlookers, it’s a twin turbo, Italian symphony.

The steering wheel is large and requires notable effort but conducts the P Zeros with precision befitting a world class, quick ratio, high performance sports sedan. I prefer paddle shifters that aren’t fixed in place, but the automatic in this car is both smooth when you want it to be and hard and fast depending on the selected drive mode and your particular style.  And the off throttle burbles are a sports car lover’s delight.  The Pirelli rubber is a perfect fit here, providing a beautiful balance between quiet comfort and spirited grip.  And the 50:50 front-to-rear weight balance and aggressively tuned adaptive suspension allows you to drive the Quattroporte harder and with more satisfaction than any of its stalwart competitors.  Double pane glass and other measures keep the interior free of extraneous sounds other than the somewhat droning exhaust note which is muted but prevalent.  Driving modes include the aforementioned, relaxed I.C.E. setting, Normal and Sport with an additional button for a locked-in firmer suspension with even less body roll.

Base price of this model is about $108,000 and this tester is personalized with over $26,000 in options including the Luxury Zegna package fitted with Rosso seats with special silk inserts and stitching, piano black trim, and a 15 speaker Bowers & Wilkins premium sound system that has to be heard to be believed. It includes a new Clari-Fi function for 2016 that enhances digitally compressed music.  Lots of Fiat-Chrysler bits abound like the UConnect infotainment system called Maserati Touch Control here, audio switches mounted on the backside of the steering wheel, and the driver information display – all familiar to Chrysler 300 owners.  The rear seats offer the greatest legroom in the standard wheelbase class.  Plus there are power blinds all around, heated seats and a USB port in the center console.  And the 19 cubic feet of truck space makes the Quattroporte the luggage king, accessible with a kick of the foot under the bumper.

Besides side blind zone alert and a backup cam, you’ll have to wait for the 2017 model for more advanced driver assistance features. Other criticism is targeted at the shifter which is frustratingly difficult to engage, seats with not nearly enough adjustments and a lack of lateral support, the absence of modern interior lighting and the visible rust on the wheel hubs.  On the cutting edge of executive sedan technology it is not, but the Quattroporte puts more of an emphasis on the driver than any of the others.  For about $1,000/per month on a lease or $136,170 as-tested to call your own, the S Q4 buys you exclusivity and Italian style with the heartbeat of a Ferrari.

TestDriveNow.com is America’s best automotive resource to research and decide on your next new car, truck, or SUV. TDN features video reviews by top auto critic Steve Hammes and the latest news of new vehicles coming on the market. Visit https://testdrivenow.com