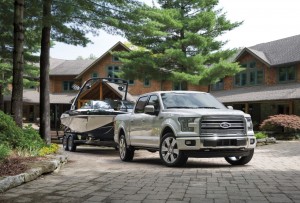 Let’s face it; backing up a trailer is never much fun. But the 2016 Ford F-150 has a new trick up its sleeve to make that nerve-racking job a heck of lot easier. The all-new Pro Trailer Backup Assist puts your mind at ease at the boat launch by allowing you to steer the trailer instinctively by turning a knob left or right to indicate direction while the truck controls its steering and limits vehicle speed.

Leveraging advanced camera technology and tested for almost a decade, Pro Trailer Backup Assist is priced at $395 and is available on all F-150 models.  It requires the Class IV Trailer Hitch and the Rear View Camera with Dynamic Hitch Assist.  Coming off of its groundbreaking, aluminum-bodied, 2015 transformation the 2016 F-150 adds new Special Edition Appearance Packages available on XLT and Lariat trims and a Compressed Natural Gas/Propane fuel prep package for 5.0-liter V8-equipped models, priced at $315.  And replacing MyFord Touch is the new SYNC3 communications and entertainment system with its easier-to-understand graphical interface.

MSRP of this SuperCrew model is about $60,000. Other trims include XL, XLT, Lariat, King Ranch and Platinum in a wide variety of cab, box, engine and drive configurations.