The Muscle Car revival continues fast and loud, not to mention smarter and just downright better. Take this all-new 6th generation Camaro for example. Lighter, faster, nimbler and more efficient this one is so good it’s redefining the segment.

Though it’s within 2” of the exterior dimensions of the previous Camaro, this one feels much smaller from behind the wheel. Chevy likes to accentuate the fact that only 2 parts carry over from the Gen 5 car; the rear bowtie and the SS badge. That’s because it’s built upon GM’s new rear wheel drive Alpha architecture – the same one that underpins the similarly excellent Cadillac ATS. But before you conjecture that that the Camaro has been transformed into some sort of buttoned-up European coupe, listen to this and remain calm. The naturally aspirated V8 lives and it sounds better than ever, courtesy of Chevy’s LT1 6.2-liter Corvette motor and a dual mode performance exhaust system that bypasses the mufflers under acceleration to produce that iconic small block euphony. The 7-speed manual remains exclusive to the Vette, but I never missed that extra gear. This 6-speed with its muscular clutch pedal and sure shifting stick provides the unencumbered playfulness Camaro owners love. 200 pounds lighter with a stiffer body, greater downforce and a new suspension tailored for a more precise feeling of control, this SS joins car to driver like never before. Approach the car and you hardly notice its smaller size, but once inside the squinty windshield is at first a bit shocking. There’s a chop top feel but that small window of visibility quickly seems much bigger and within a handful of miles in this perfectly supportive driver’s seat it’s not even an afterthought. 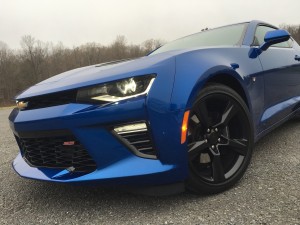 Chevy left nothing behind in this redesign and just as impressive as the drive itself is this new interior. Creative concepts, brilliant tech and high quality fuse to produce a cabin you can be proud to show off and seats that invite long trips.

ChevyMy Link with OnStar and Apple Car Play makes competing systems look like bargain basement electronics. Slick, fast and best-of-all, easy to use, this setup also incorporates a 4G Wi-Fi connection. I love it and being able to integrate my phone in this way makes life easier and safer. Out in front of the driver is a heads-up display and a configurable information center with steering wheel mounted controls. Other cool features include dial vents that also change the temperature, memory settings, heated seats, heated steering wheel and if you have a compatible smartphone, wireless charging on this pad behind the center console. LED ambiance illumination is also an oh-wow moment with a huge palette from which to choose. The ceramic white accent trim is optional and further contributes to the high class interior. As for the rear seats, they’re really more for stuff than people. A big trunk though gives you the freedom to travel.

I know wow isn’t very descriptive but that’s the first thing that comes to mind with this new SS. No longer is the Camaro too big for its britches, it’s now a sports car that connects with you in ways it’s never done before. There’s real, no excuses driving precision here but it also retains its rear drive V8 wickedness with all the right sounds and sensations. Selectable driving modes, multi stage exhaust, a hard biting limited slip and the must have magnetic ride control shocks form this magical mixture to create the Camaro of your dreams; a brilliant job of GM engineering.

In order of excitement, it starts with the Snow/Ice setting with its stealth exhaust mode, continues to an everyday comfort Touring setup, then to a ready to run Sport setting and tops off with the most vociferous Track mode with firmer shock damping, tighter steering, and an even more responsive throttle. Within lies a competition mode for the traction and stability control systems that enable driving like this. The 20” Goodyear Eagle F1 run flats provide lots of glue and a relatively quiet ride. 4 piston Brembo brakes front and rear are standard while a 6-piston upgrade is available for a hefty sum. With items like torque vectoring, the SS just sticks better and imbues greater driver confidence. Oh, and yes it’s darn fast with 455 horsepower and 455 pound-feet of torque inspiring a 0-to-60mph time of 4.3 seconds. And these paddle shifters don’t change gears…they active the downshift rev matching feature which expertly blips the throttle with each drop in gear and adds even more acoustical awesomeness. And for everyday quietness and comfort, the optional Magnetic Ride Control gives you Malibu-level easiness when the Sport is dialed down. Gas mileage picks up an extra MPG on the highway, now rated at 16mpg city/25mpg highway on premium…cylinder deactivation is reserved for automatic-equipped models.

So what would I change? This 2SS Coupe stickers for $46,000 which even for a loaded, top of the line model caught me slightly by surprise and there’s not much you can do about it but the Camaro attracts all of the wrong attention with every knucklehead on the road trying to provoke a testosterone battle. I’ve always leaned toward the Challenger in this class, mostly because of its retro persona but there’s no denying the 2016 Camaro SS its place atop the segment podium.