BMW has introduced a dizzying array of new models over the past few years, filling nearly every segment and giving shoppers the utmost selection. And one of my favorite models just seriously upped its performance quotient.  The new 2016 X4 M40i offers enhanced driving dynamics and best-in-segment acceleration befitting the letter M.  Just looking at it, the metallic accents, exclusive 20” wheels, Michelin Pilot Super Sport tires and a sport exhaust system with Black Chrome tailpipes flanking both sides proclaim this to be a special X4. 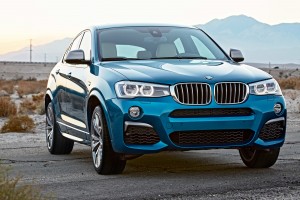 The M treatment perpetuates inside as well, with sport seats and a host of other performance bits.  But what about the power?  Based upon the 3.0-liter inline 6 in the X4 xDrive35i, this newly developed motor using TwinScroll Turbo technology adds boost and an increase in the amount of fuel injected resulting in the most powerful M Performance gas engine to date, with 355 horsepower and 343 pound-feet of torque.  That helps put away 60mph in 4.7 seconds, yet gas mileage continues to impress, rated at 21mpg combined on premium gas.

The X4 M40i is offered in 7 colors with pricing starting at $58,795 including destination.