Posted on September 2, 2014 by TestDriveNow.com 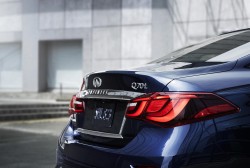 Infiniti announced pricing for the 2015 Infiniti Q70, Q70 Hybrid and new Q70L models of its flagship performance luxury sedan. They are scheduled to go on sale at Infiniti retailers nationwide beginning late September. 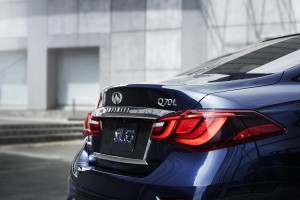 The new Infiniti Q70L broadens Infiniti’s offerings for those who desire enhanced spaciousness and versatility, appealing to the sporty sedan fan that also requires executive levels of interior room. The additional 5.9 inches in the wheelbase not only increases the knee and leg space in the back, but also greatly augments the athletic presence of the sedan.

The Manufacturer’s Suggested Retail Prices (MSRP)* for the 2015 Infiniti Q70 are:

On top of the fresh exterior and long wheelbase version, the Infiniti Q70 is also available with new intuitive technologies, which help owners become better and safer drivers, such as:

Enhancements to the 2015 Q70 include increased quietness in the cabin and improved ride comfort across the lineup.

About the 2015 Infiniti Q70
As Infiniti’s halo sedan, the Infiniti Q70 embraces the essence of all things Infiniti – style, performance, luxury, craftsmanship and technology.

With its redesigned exterior styling for 2015, the refined elegance of the Infiniti Q70 now takes on an even more upscale image.

Infiniti’s signature LED headlights, which evoke inner intelligence and human insight, make an immediate and indelible first impression. The distinctive headlights accentuate the new double arch grille, which now takes on a more three-dimensional look due to the elaborate detail of the high-quality waved mesh finish and chrome surround. The same solid feel is echoed in the new front bumper with integrated LED fog lights, giving the Q70 a dignified presence on road.

From the front, a strong body line rises from the grille, flowing through the bodyside like a wave and blending into the shape of the new rear LED combination lights, forming a compelling profile that highlights the Q70’s sporty stance.

At the rear, the new design of the taillights creates a horizontal flow in motion while the high-quality lighting signature evokes a fresh and classy image. The top line of the trunk lid has been flattened while the rear bumper has been slimmed down to create a longer and lower visual impression, further emphasizing the premium sedan’s sporty and powerful styling. The chrome rear finisher adds a touch of class to the entire rear view. The 18-inch aluminum alloy wheels have also been updated, with designs unique to the two wheelbase versions respectively.

The optional Sport Package features a specially designed front bumper that gives an even lower and wider stance, and 20-inch wheels and tires. The triangular cutouts in the bumper are inspired by racecar wings to give a sporty and bold presence. The lower part of the rear bumper is also finished in high-gloss black paint to make it look even more athletic.

Reflecting the sensuous lines of the exterior, the new Infiniti Q70 continues to serve up a well-appointed and inviting interior with high-quality materials such as Japanese Ash wood trim, attention to detail, and user-centered technologies.

The new Q70 is also quieter than before, even at high speeds, contributing to the cultivated in-car atmosphere. Infiniti engineers have added noise insulation materials, increased the sealing, and stiffened the wheels, resulting in a reduction of road noise on urban roads.

While the Q70 is known to have a roomy interior, the additional 5.9 inches in the Q70L takes the extended sedan’s rear roominess beyond what competitors offer. Rear knee room is at a superior 32.5 inches in the Q70L, while rear leg room is at an outstanding 41.8 inches, so rear seat passengers can comfortably cross their legs. The excellent rear ingress and egress make traveling in the back of a premium sedan a more enjoyable experience for taller passengers.

CLICK HERE to get a FREE ONLINE PRICE QUOTE for your NEW INFINITI from a dealer near you. Absolutely NO OBLIGATION.