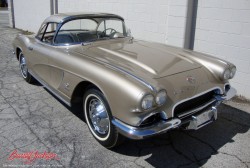 Barrett-Jackson, The World’s Greatest Collector Car Auctions®, will feature a number of impeccable classic and custom Corvettes from the 1950s and ’60s during the 13th Annual Palm Beach Auction in Palm Beach, Florida, April 17-19, 2015, at the South Florida Fairgrounds. Among the top models is an unrestored, fuel-injected ’62 Corvette (Lot #402) with only 29,000 original miles.

“The Corvette has captured the hearts of car aficionados since it rolled out in 1953,” said Craig Jackson, chairman and CEO of Barrett-Jackson. “The first generation was undeniably head-turning, and by the late ’50s the Corvette was earning its reputation on the race tracks. Today the Corvette is one of the most revered American sports cars and we’re excited to have many of the best examples represented during our Palm Beach auction.”

This ’62 Corvette “Fuelie” (Lot #402) is considered one of the most original unrestored 1962 Corvettes in existence. An impressive history began when it was selected as one of three Corvettes presented in the 1976 original Michael Antonick publication, “Corvette! The Sensuous American,” a book dedicated to Harley Earl. This “Fuelie” was also part of the Chip Miller collection from 1980 through 1986 and has earned a total of six NCRS Top Flight Awards, including two National Top Flights. With the original paint, original drive train and only 29,000 miles, it’s as though this Corvette has been locked in a time capsule all these years. 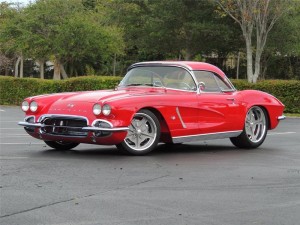 The Palm Beach auction will also include a meticulously built ’62 Corvette Custom Convertible (Lot #420) powered by a strong, dry sump LS7 427/505hp engine, six-speed transmission and a custom nine-inch independent rear axle with inboard brakes. The immaculate interior is donned in high-grade custom leather upholstery and custom-built gauges. The attention to detail and superior craftsmanship on this Resto-Mod creates a one-of-a-kind opportunity for bidders.

“The Corvette wasn’t born an icon, but it’s become as ingrained in American culture as rock ’n’ roll and baseball,” said Steve Davis, president of Barrett-Jackson. “From the early models to the new 2015 Corvette supercar, this American machine is a true mechanical achievement. I’m confident the Corvettes crossing the block in Palm Beach auction will be among our crowd favorites.”

An incredibly rare ’65 Corvette (Lot #435) with matching numbers on the engine and transmission adds to the list of amazing Corvettes crossing the auction block in Palm Beach. In 2014, over 600 hours were spent on restoring this classic in the garage of seven-time NASCAR champion Richard Petty. “The King’s” team of experts rebuilt, repaired and rechromed every original part that could be brought back to new condition. The engine, transmission and rear differential were completely rebuilt and the brake lines and fuel lines were upgraded to stainless steel with all hardware being factory replacements.

The ownership history of this ’65 Corvette is just as impressive as the car itself, all of which is well-documented with invoices and letters. The late British actor Sir John Mills originally purchased the car for his daughters, actresses Juliet and Hayley Mills. Juliet and her husband, actor Maxwell Caulfield, owned the car through the mid-1980s.

Live coverage of the Barrett-Jackson Collector Car Auction in Palm Beach will be broadcast in live, high-definition TV coverage on Velocity and Discovery from Friday through Sunday, April 17-19. 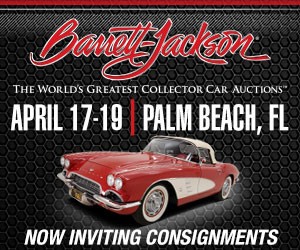 For more information on becoming a bidder, follow the link to http://www.Barrett-Jackson.com/Bidder/Home.