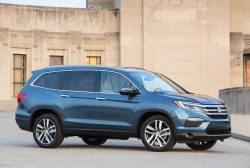 The 2018 Honda Pilot goes on-sale tomorrow with a starting Manufacturer’s Suggested Retail Price (MSRP) of $30,900 (excluding $975 destination and handling). The Honda Pilot has long been a top model in the three-row SUV segment and continues to receive accolades, including the 2017 Consumer Guide Automotive Best Buy Award and U.S. News & World Report 2017 Best Cars for Families. 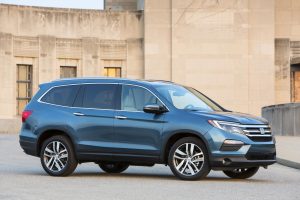 The three-row 2018 Pilot is powered by a 3.5-liter, direct-injected i-VTEC  V6 engine with Variable Cylinder Management (VCM) paired with a smooth-shifting 6-speed or 9-speed automatic transmission (6AT or 9AT). This fuel-efficient yet powerful engine produces peak horsepower of 280 and torque of 262 lb.-ft., with an EPA fuel economy rating of up to 20/27/23 mpg for 2WD models and 19/26/22 mpg for AWD variants (city/highway/combined).

The Honda Pilot’s roomy cargo area provides a high level of utility without compromising third-row space. Getting in and out of the third-row is easy as well thanks to a large entryway and available one-touch slide and fold second-row seat. The 2018 Honda Pilot further bolsters its family-oriented user friendliness by way of advanced in-vehicle connectivity, such as Apple CarPlay™ and Android Auto™ integration.

Along with the majority of Honda’s lineup, the 2018 Pilot can be equipped with the Honda Sensing® suite of safety and driver-assistive technologies, which is available as a standalone option on EX and EX-L trims and standard on Touring and Elite trims. Honda Sensing includes Collision Mitigation Braking System™ (CMBS™) with Forward Collision Warning (FCW), Lane Keeping Assist System (LKAS), Adaptive Cruise Control (ACC), and Road Departure Mitigation (RDM) with Lane Departure Warning (LDW). Additional safety and driver-assistive features on the 2018 Pilot include a standard multi-angle rearview camera and available blind spot information (BSI) with Rear Cross Traffic Monitor, respectively.

The Honda Pilot was designed and developed by Honda R&D Americas, Inc., in Los Angeles and Ohio. The Pilot and its V6 engine are produced exclusively by Honda Mfg. of Alabama plant in Lincoln, Alabama, using a mix of domestic and globally-sourced parts.