Posted on January 21, 2023 by Car Critic Steve Hammes — No Comments

Now entering its fifth-generation and awaiting an all-electric powertrain expected in 2024, this redesigned model eschews supercharged power in favor of a twin-turbo V8 and elevates the seating experience to new heights.  But the jaw-dropping price tag comes with utmost expectations, some of which fail to be met.

This Sunset Gold Satin Finish catches the light in glorious ways.  It’s an option exclusive to the First Edition model which itself is based upon the lofty Autobiography spec.  In standard wheelbase, the MSRP starts at $159,550 while this tester and its special matte paint – no automated car wash for you – checks in at a whopping $169,900.  The new design is stunning yet instantly recognizable.  It’s a Range Rover at first sight yet fully modernized.  Metal is bent and rounded in spectacular ways creating a gorgeous shape, particularly atop the 23” gloss black wheels.  For the first time, a third-row seat is optional on long-wheelbase models affording room for seven passengers.  This First Edition SWB can technically seat five but no one would be happy in the middle rear seat; it’s very hard and uncomfortable.

The Range Rover has long since provided vault-like accommodations; shut the door and leave the outside world behind.  This one is no different.  As a matter of fact, it’s even more isolating.  Assisted by a third-generation Active Noise Cancellation system which generates an NVH cancelling signal through the audio system’s 35 speakers, the cabin defines silence.  Only the occasional, muted burble of the V8 and the whooshing sounds when adjusting the air suspension can pierce the muteness.  And the ride quality is as close as it comes to the magic carpet experience in a Rolls-Royce.  With the new eHorizon Navigation feature reading the road ahead and priming the suspension for irregularities and Dynamic Response Pro leveraging the faster 48-volt electrical architecture to quickly minimize body roll, the Range Rover’s ride is above reproach.  It is as serene as the British countryside on a foggy morning.  Also, All-Wheel Steering drastically cuts down the vehicle’s turning circle making it the most easily maneuverable Land Rover – very impressive.

Though the Terrain Response 2 system provides six driving modes for tackling all types of obstacles, this Range Rover takes a new approach to its 4X4 capabilities.  In the Auto setting, the front-wheels are disconnected from the driveline in order to maintain a modicum of fuel efficiency, jumping in only when more traction is needed.  Land Rover refers to is as intelligent All-Wheel drive, predictively proportioning torque between the front and rear axles as well as between the rear wheels for a torque vectoring effect.  Though seldomly used, the Range Rover has an impressive pantry of off-road features including a jacked-up suspension with 11.6” of ground clearance, a nearly 35-degree approach angle and a maximum wading depth of almost three-feet.  Dial in the terrain type, choose the off-road pages and it’s four-wheeling for dummies.  There’s a trail cam, a wade sensing feature that measures the depth of the water underneath and even a depiction of the exact dimensions of your vehicle to ensure a drama-free jaunt.  But on sport truck all-season tires, it’s practically all for naught.  There’s no way these Pirelli Scorpion Zeros are digging into mud or traversing a rock bed.  And if you pop one, there’s a $600 replacement cost.  At 23” in diameter, an all-terrain tire for this First Edition doesn’t exist. 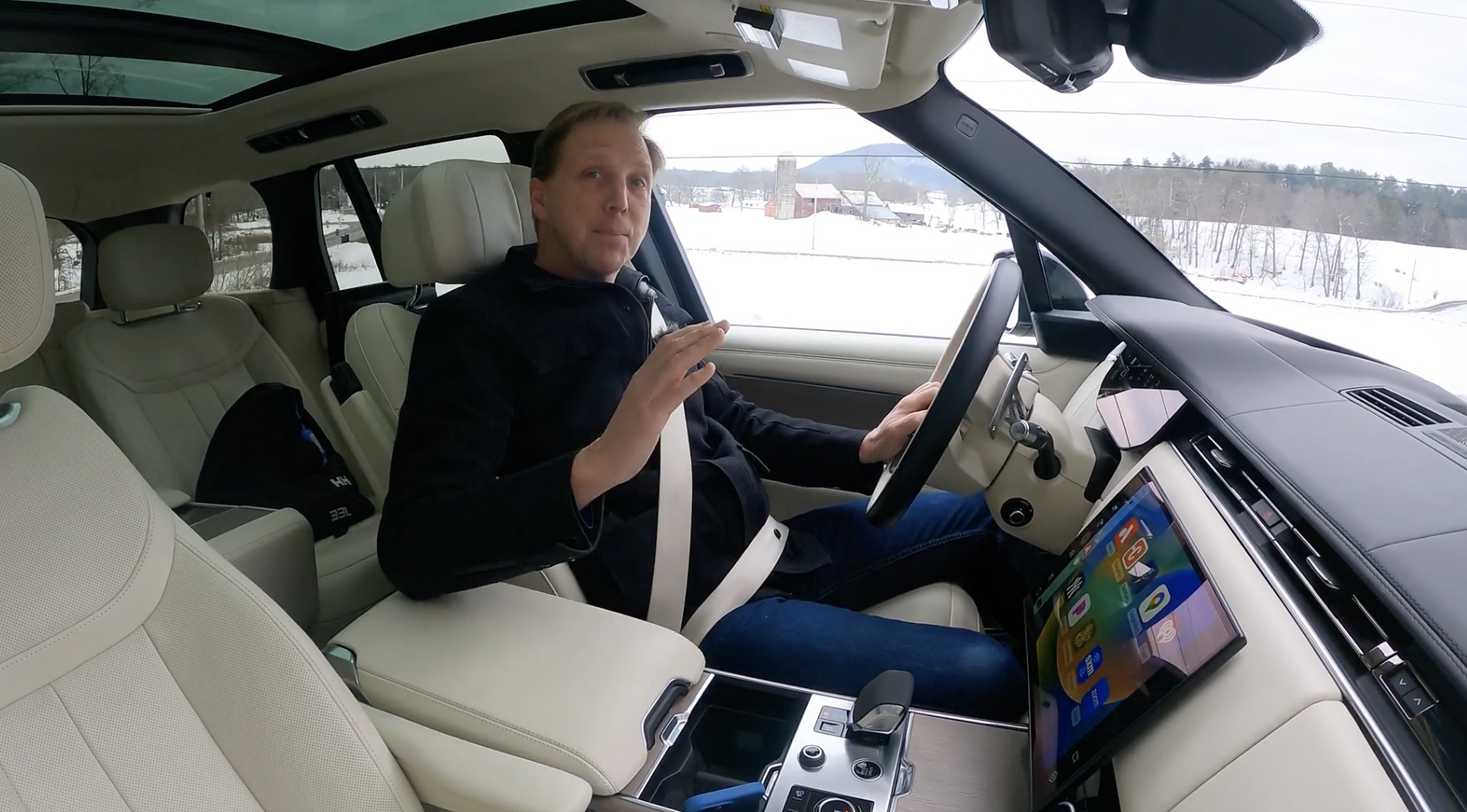 So, attention then turns to the cabin which receives the full semi-aniline leather treatment and leather headlining – a first for me – courtesy of the SV Bespoke upgrades.  There’s beautiful Natural Ecru Walnut veneer trim with a tiny First Edition script emblazoned upon it in front of the passenger seat.  The look is classic Range Rover and minimalist in nature though perhaps too restrained at this price.  I was expecting a little more sizzle with this Kobe steak instead it’s very staid in its design.  Market research must’ve directed Land Rover to overemphasize seat controls which it has done.  The 24-way heated and cooled, hot stone massage front seats and Executive Class Comfort Plus rear seats offer endless configurations.  And don’t’ worry; rear seat passengers can also get that hot stone massage in addition to numerous other programs and intensity levels.  The Range Rover’s “jump the shark” moment is the power operated, heated rear center armrest with a power cupholder extension.  Not only is it the height of excess it’s actually a bit annoying.  Sometimes, even for the rich, the KISS principle applies. Controlling all of this and more, like ambient lighting, happens via a non-removable touchscreen built into the armrest.

The dual rear screen entertainment system is also less than expected.  The screens are inexplicably fixed in place, all up in your grille, and they don’t offer that much.  A recline function replete with ottoman commences chauffeured nap time but these seats are so bulky and the screens so prominent that they make this space seem small.  Also, they only fold so far when maximizing cargo room so forget about a flat load floor.

The 13-inch touchscreen infotainment system, called Pivi Pro, is one I’ve experienced in other JLR vehicles and although it’s an improvement from the previous setup it’s not exactly stellar.  It can be used with haptic touch which replicates an actual button click or as a traditional touchscreen.  There are some neat features within like the 3D surround view monitor and performance/off-road gauges but navigating the icons is often cumbersome.  Land Rover strived for a clean, uncluttered cabin, and in a vehicle of this ilk, that’s not an easy task.  There is very little switchgear meaning the bulk of the features lives on the screen which can be frustrating for the user.  Voice controls are also very slow to react.  Otherwise, the large-print head-up display and driver information screen work well and can be heavily customized, such as turning the entire driver array into a map.  But again, the steering wheel controls require hard, ambiguous pushes and don’t contribute to the effortless persona Land Rover desires.

The 4.4-liter twin-turbo V8, sourced from former owner BMW, produces a mighty 523 horsepower and 553 pound-feet of rousing torque.  This replaces the beloved, stalwart 5.0-liter supercharged V8.  Throttle inputs can be touchy if you’re heavy with the right foot but it’s a great engine that outputs a lot of power with no degradation in fuel economy.  Mated to an 8-speed automatic transmission, gas mileage remains unchanged at 16 mpg city/21 mpg highway with a 495-mile driving range.  With launch control activated, this 5,530-pound SUV clears 60 mph in a mere 4.4-seconds.  It’s very quick and includes a Dynamic mode that lowers the body and heightens its reflexes, though it’s no Range Rover Sport when it comes to crips handling.  Everything about the drive is supremely soft but controlled.

Whether using the fun Tailgate Event Suite feature which takes advantage of the Range Rover’s trademark split tailgate providing leather cushions, speakers and lighting, or immersing yourself in the Meridian Signature Sound System with headrest speakers, this Range Rover First Edition is indeed a memorable adventure.  But without a hands-free driving system, limited usable space and a cabin that’s a little too classically styled for my tastes, $170,000 is a big ask.