As Chevy has flat out stated, we’ve taken the front-engine Corvette as far as it could go. The much rumored and highly anticipated mid-engine Corvette is finally here further cementing its place as the attainable exotic. 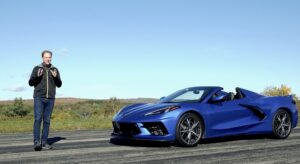 First off, I haven’t had a car attract this much attention in forever.  Car people, non-car people, doesn’t matter.  Everyone knows this is something special. 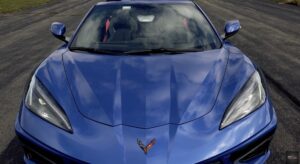 It looks like a race car and depending on the angle it could be a Corvette, a Ferrari, a Lambo or an NSX.  But this baby bleeds red, white and Elkhart Lake Blue.  And this isn’t just the all-new C8 Corvette, this is the Convertible with a power retractable hardtop so seamlessly integrated you wouldn’t know this isn’t the Coupe. 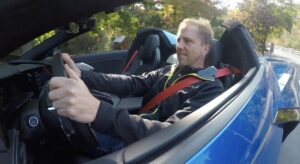 Well, that is unless you go looking for the window to the engine…about the only sacrifice you’ll have to make for top-down driving. 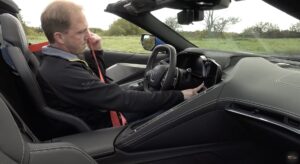 Regardless, this is my first time behind the wheel of the mid-engine Stingray decades in the making and it has not disappointed.  Why does it matter where they stick the engine?  It’s a simple matter of physics.  Shifting the bulk of the car’s weight to behind the driver dramatically changes the dynamics.  So take whatever experience you’ve had with older Corvettes and throw it out the window.  The days of understeering into a corner and then oversteering out of it  are a thing of the past. 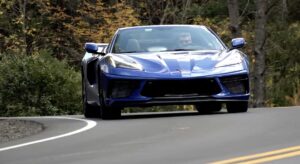 This Vette snakes through every turn with the fluidity of a steel roller coaster providing the thrill of riding on rails.  And with the seats positioned closer to the car’s center of gravity, you barely feel the G forces as you power through a twisty road.  This is a more mature Corvette that doesn’t flex its muscles until its go time. 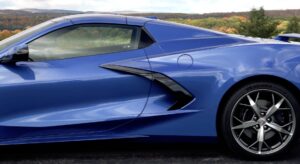 With the use of mixed materials including carbon fiber, this Convertible weighs less than 3,500 pounds and it’s backed by GM’s familiar 6.2-liter V8; an engine popular in the company’s big SUVs.  But here, with the optional Z51 Performance package, it’s tuned to 495 horsepower and 470 pound-feet of torque that Chevy claims gives the Stingray Coupe a sub 3.0 second 0-to-60mph time. 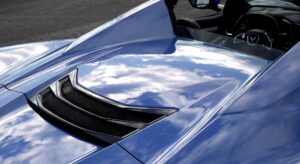 According to the performance data recorder – that I didn’t realize until afterwards records in 1080p resolution with sound – I’ve been consistently getting 3.7 seconds while using the launch control feature.  Either way, it’s seriously fast for a standard Corvette – one that doesn’t use turbos or a hybrid powertrain to do the work.  And the new 8-speed dual clutch transmission is seriously good; smooth like a traditional gearbox yet smarter and more direct. 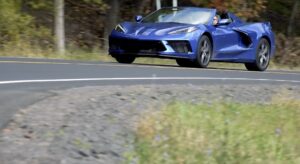 This isn’t a redesign of the Corvette this is a reinvention. It’s a completely different experience then you’ve ever had in a Corvette before. The very first thing you notice is how docile it is. Sure, it fires up with ferocity – if you want it to – but the ride quality is impeccable for a car of this ilk, and in the default Tour Mode you could easily be in a Cadillac – it’s that refined. Your surroundings are much more premium and complete. 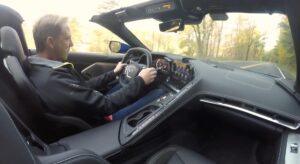 The view out the front windshield gives you more of a race car like feel. And then when you get to your first curvy road you experience the effortless nature that is this new Corvette. 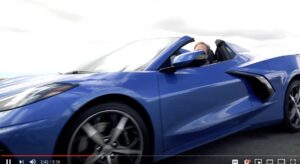 It glides through turns like only a mid-engine car can.  Previous Corvettes felt like they had to work at handling. This car feels like it could do it in its sleep. And that’s the one interesting thing about this car: I almost wonder if it’s too good. 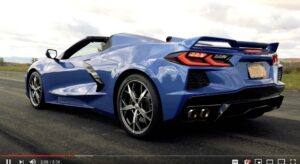 There’s a visceral attribute you expect in a Corvette that is somewhat lacking here.  That’s not necessarily a bad thing but some loyalists might miss it.  Even with the performance exhaust, at times I find myself craving even more sound from the driver’s seat. It’s fairly muted. From outside however, the crack it emits while upshifting in Track mode could rupture an eardrum. 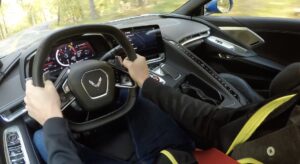 A weather mode for times when surfaces are slippery also includes a stealth setting for the pipes.  And then a driver-configurable Z mode allows for a tailored experience that affects just about everything other than the suspension. 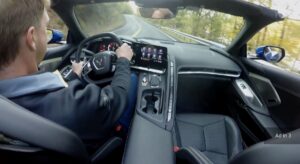 The multitude of Performance Traction Management settings is also absent here as it’s bundled with Magnetic Ride.  And these Michelin Pilot Sport 4S tires running 305 wide in the rear are an exceptional fit balancing a touring ride quality with total performance. 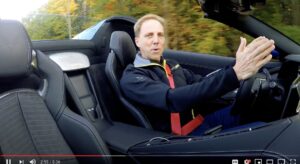 This is the most driver centric cockpit I’ve ever seen. Everything is designed for you, not the least of which, makes controlling the infotainment system the best of any car. But where does that leave your copilot? In a narrow confined box without much sense of involvement. 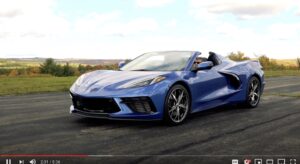 This unique layout, completely angled to the driver, is perfect for well the driver.  Over here and this long bank of climate control buttons dividing the cabin might make your better half exclaim “don’t ever put Baby in a corner.” I love the squared of steering wheel, the head-up display, the smart climate settings that know when to heat or cool you, and these optional GT2 seats with adjustable everything and exposed carbon fiber.  The cabin is a Corvette revolution that no longer feels like an afterthought. 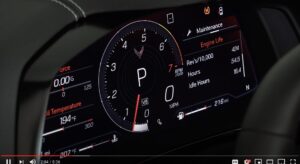 The tech is modern with wonderful infotainment, there’s a full pantry of electronic safety features and everything is just super easy to use, like the perfectly placed wireless charge pad.  Even the opening animation is brilliantly executed.  It’s high quality and highly functional.  Even the 2 trunks, if you will, make for smart storage, capable of carrying 2 sets of golf clubs in the rear and a suitcase up front.  But with the engine so close, be careful with what you store back here.  My hand sanitizer shot out like hot oil after a ride in this space. 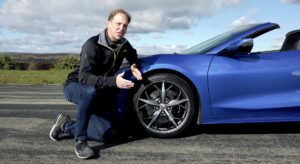 As for the Convertible experience, itself?  You sit more enclosed than is typical and there’s a power rear window for more protection but it still gets a tad turbulent in here making conversation a little more strained than in other convertibles I’ve driven lately.  You can work the mechanism though from the key fob and it’ll go up or down while driving up to 30mph.

Now more fuel efficient at 19mpg in mixed driving and a crazy good 27mpg highway thanks in part to the engine’s V4 mode, this Stingray Convertible starts at about $67,000 and checks in here with the middle 2LT Equipment Package, Z51 group, Spectra Gray wheels, GT2 buckets and red seat belts for $82,680.  An inarguable bargain for what amounts to supercar status and performance.  When asked, almost everyone has guessed this car to cost about $120,000.  A couple of notes; there’s no front lift system on my car but there is a camera for just that purpose, the view out the back is almost completely obscured so this rear view camera mirror comes in handy though a 360 degree would be nice, and at age 48 getting in and out of this car isn’t as easy as it used to be but unlike some mid-engine cars the sills here are actually quite narrow and tall people will have no problem getting comfortable.

So nimble, so stable and so long trip comfortable this is nothing short of an amazing feat for Chevrolet.  Just paint mine Accelerate Yellow.