If you cherish exclusivity in your ride and are looking for the proverbial diamond in the rough I’ve got one for you. 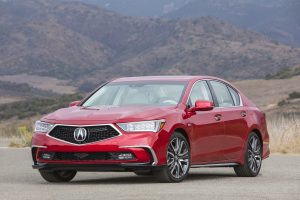 The Acura RLX is a true sleeper with eye-opening performance and because it sells in low volume, you won’t see yourself coming and going.

For 2018, both the front-wheel drive RLX with Precision All-Wheel Steer and the cutting edge RLX Sport Hybrid with Super-Handling All-Wheel Drive receive significant updates that ratchet up both the styling and the excitement from behind the wheel.  Never much of a looker, the 2018 models are now dressed for success with the new Acura grille and more chiseled bodywork.

Meanwhile, the Sport Hybrid uses twin electric motors that independently drive the left and right rear wheels to enhance both dynamic handling and all-weather traction.  New for 2018, torque distribution improvements contribute to better response linearity and stability.  This is the Acura that pioneered this innovative 3-motor hybrid system which has since been integrated into the NSX supercar and MDX Sport Hybrid.  A new 10-speed automatic transmission helps improve acceleration and passing times in the 310 horsepower P-AWS equipped model while the 377 horsepower Sport Hybrid retains its 7-speed dual clutch transmission while earning an estimated 28mpg in combined driving.  Both cars use a 3.5-liter V6 gas engine.

For 2018, the RLX receives redesigned seats as well as a new Espresso interior color option. On the tech side, Traffic Jam Assist has been added to the AcuraWatch suite of driver assistive technologies, helping keep the car in its lane in low-speed, highly congested traffic situations.

Pricing for the RLX starts at $55,865 while the Sport Hybrid powertrain adds $7,000. Acura’s flagship is fun to drive, super rare and bargain priced.