Though the average transaction price for a new vehicle is nearly $35,000, more affordable new car alternatives still exist. Case in point, the refreshed 2017 Mitsubishi Mirage – a compact hatchback with a starting price of $13,830 including destination. 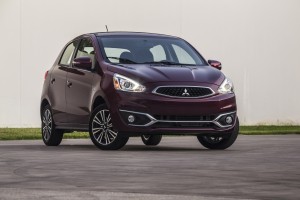 Sporting a new exterior design, improved performance and enhanced interior appeal the Mirage equipped with the continuously variable transmission is rated at 39mpg in combined driving.  The redesigned exterior not only lends to a more substantial appearance but also contributes to improved aerodynamics.  Inside, the Mirage is updated with new seat fabrics, gauge cluster and steering wheel.

Newly available features such as a 300-watt Rockford-Fosgate audio system with EcoPunch, Apple CarPlay and Android Auto bring modern tech to the frugal car shopper. With a very low curb weight of less than 2,000 pounds, the 1.2-liter 3-cylinder engine makes the most from its output, upped to 78 horsepower and 74 pound-feet of torque for 2017.

Handling and braking have also been improved through the use of stiffer components and larger diameter front discs and rear drums.  Safety cell body construction which Mitsubishi terms RISE and 7 standard air bags including one for the driver’s side knee highlight the protective features.

Mirage is offered in base ES, midlevel SE and range-topping GT trim with a 5-speed manual standard on all but the GT.