The Chevy Silverado half-ton underwent a significant freshening last year with new front fascia designs, additional LED lighting, the expanded use of the 8-speed automatic transmission and a bevy of comfort and convenience upgrades.

Now for the 2017 model year, the Silverado 1500 can do more.  Its trailering rating has increased to a maximum of 12,500 pounds giving it bragging rights among crew cab models in the segment.  Other updates focus on technology. 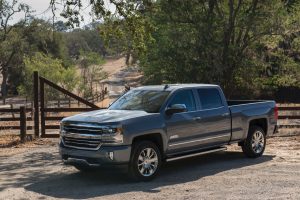 Two new colors; Graphite and Pepperdust also debut for 2017.  While a 6-speed auto is standard on all but the biggest V8 models, the 355-horsepower 5.3-liter V8 on LTZ and High Country models can now be upgraded to an 8-speed automatic for improved start off with a heavy load while reducing RPMs at highway speeds.  Four-wheel drive Silverados equipped with this gearbox are rated at 15mpg city/20mpg highway.