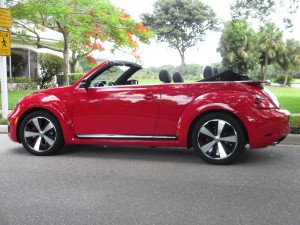 The Beetle Convertible has been an instant success for Volkswagen since it went on sale in December 2012 as a 2013 model. The sportiest and most dynamic version of the iconic softtop seen so far has quickly become one of the best-selling convertibles in the U.S. 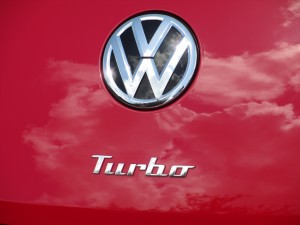 For 2014, the Beetle range receives a number of enhancements. The base Beetle’s 2.5-liter engine was phased out and replaced during the Model Year by a new, locally sourced, turbocharged 1.8-liter four-cylinder engine, designated EA888 Gen 3. This produces 170 horsepower and 184 pound-feet of torque and offers highly competitive fuel economy. Electro-mechanical power steering replaces the 2.5’s hydraulic setup. 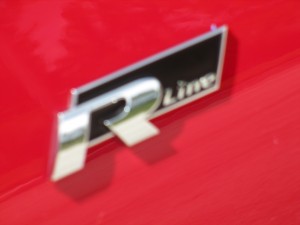 The Beetle Turbo lineup is renamed as the R-Line® for 2014, adding aggressively styled bumpers front and rear as well as R-Line exterior badging and R-Line door sill kickplates. The top R-Line Convertible with Sound with Navigation also features unique 19-inch aluminum-alloy wheels, Bi-Xenon headlights with LED DRLs, and leather seating surfaces; black interiors also get an R-Line badge on the steering wheel and a “metallic finish” dash pad. All Beetle R-Line models are fitted with the latest Gen 3 2.0-liter version of the EA888 2.0-liter turbocharged four-cylinder engine, which makes 210 hp.

Lastly, Volkswagen introduced its VW Car-Net™ connected services on the Beetle lineup. VW Car-Net—which has a six-month no-charge trial period—offers a wealth of security and convenience features, including Automatic Crash Notification, roadside assistance, and stolen vehicle location assistance. In addition, VW Car-Net adds: remote vehicle access; boundary and speed alerts; a vehicle health report; and an enhanced POI service on vehicles equipped with a navigation system. Most of the features can be administered through a handy smartphone app for iPhone® and Android® devices.

The third-generation Beetle Convertible is not a straight copy of the original, but a reinterpretation and development of it. Klaus Bischoff, Head Designer, Volkswagen Brand says: “Retro is not our thing: we are always looking forward. Volkswagen has reinterpreted the Beetle Convertible’s timeless design with a sportier and more dynamic silhouette, just as it did with the Beetle Coupe. The car is substantially wider, has a longer hood, and has a more upright windshield that sits further back than before. The standard rear spoiler reinforces the car’s sporty look.” 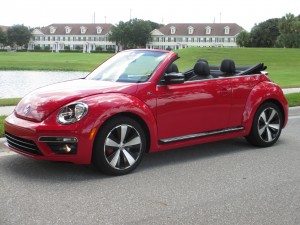 A convertible bodyshell is less rigid than a coupe’s because the upper part of the structure is open, so the Beetle Convertible’s body needed reinforcements. This included the use of partial body reinforcements and sheetmetal with greater strength such as:

Due to the targeted use of materials and laser welding of selected parts, the body stiffness was increased by 20 percent over that of the previous New Beetle Convertible: the torsional rigidity is now 17.8 Hz. 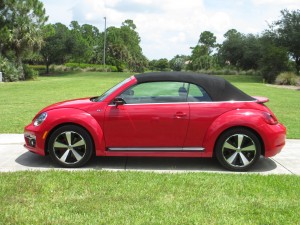 Top up, the Beetle Convertible has an even lower roofline than the Coupe’s. The top lies flat when it’s lowered, giving good visibility: the flexible leatherette top boot tidies up the appearance and harks back to the Beetle Convertible’s roots. Volkswagen decided to stick with a traditional softtop because it allows for a roofline that’s more like the original 1949 type 15’s. Also, a softtop takes up less space than a folding hardtop, thus giving more trunk space. The heatable rear window is made of tempered safety glass. 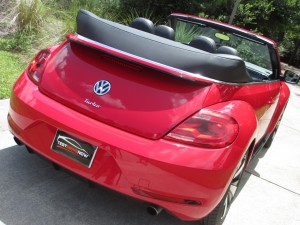 The softtop’s outer shell itself is made from three layers: an outer one of polyacrylic woven fabric; a middle layer of synthetic rubber; and an inner lining of polyester. Underneath, there’s a three-layer design for the insulation, made from polyester nonwoven fabric, polyethylene terephthalate (PET) insulating fleece, and polyester spunboard. The headliner is made from foam-laminated fabric. The result is a snug top that yields remarkably low levels of wind noise. 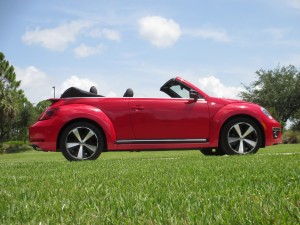 The top is powered by two electric motors and latches and unlatches at the touch of a button, which is located on the upper rail of the windshield surround. The top takes just 9.5 seconds to stow and 11.0 seconds to be raised: the difference is in the time it takes to latch the roof’s header to the windshield. The top can be raised and lowered at speeds of up to 31 mph, unusually high for a convertible. 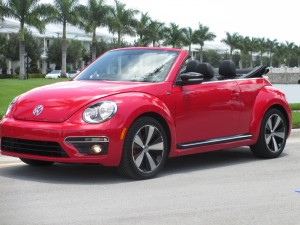 Pressing and holding the button opens the top, while pulling and holding closes it. The side windows automatically drop when the top is opened and are raised when it closes. There is an indicator light located in the instrument panel. On Beetle Convertibles equipped with Keyless access with push-button start, it’s possible to operate the top remotely, from outside the vehicle. Trunk space remains the same whether the top is open or closed.

An integrated wind blocking system is available on the Beetle Convertible as a Volkswagen Genuine Accessory. It is housed in the trunk under the convertible top area and can be safely and neatly stowed when folded and not in use. The storage compartment for the wind blocker is designed to allow full use of the trunk area.

The Beetle Convertible’s interior styling, ergonomics and quality build off the themes that were introduced with the Coupe. Klaus Bischoff says: “The shape and use of color for the dashboard harkens back to the design of the very first Beetle models and helps to create a highly individual cabin. The simple layout and clean graphics are the same as the Beetle Coupe’s, which has been a success with consumers and critics alike.” 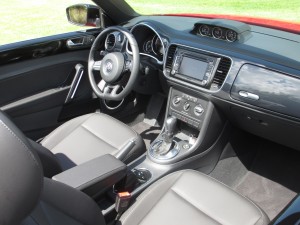 Three round gauges are arranged in front of the driver (tachometer, speedometer, fuel gauge), providing all key information at a glance. A multifunction display is integrated in the speedometer, which is housed in the central position in the binnacle. The steering wheel is specially designed with colored accents in the spokes depending on the equipment line. 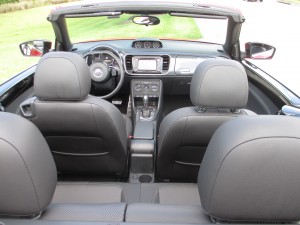 Framed by two air vents, the audio/navigation system is optimally located in the driver’s field of vision on the dashboard. Within easy reach, the climate controls are situated just below. Similar to the original Beetle, the new car has an extra glovebox integrated into the dashboard—the kaeferfach or “Beetle bin”. The lid folds upward, while the standard glovebox opens downward. Another classic feature is the auxiliary instrumentation package located above the audio/navigation system that consists of an oil temperature gauge, a sport chronometer, and a boost pressure gauge. This is standard on the R-Line and TDI Clean Diesel models. 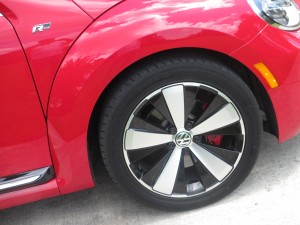 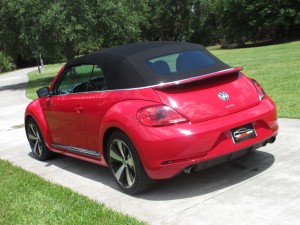 Even though the latest Beetle Convertible has a sleek and sporty roofline, front and rear passenger headroom remains plentiful, especially compared with its predecessor. The longer roof section results in 0.5 inches more rear-seat headroom. Front legroom is improved, too, by 1.6 inches, and front shoulder room grows by 2.5 inches. Overall, the interior volume has increased from 78 to 81.4 cubic feet.

The trunk is larger, offering 7.1 cubic feet of space, compared with the New Beetle’s 5.0 cubic feet. A split-folding rear seat—new on this Beetle—allows the car to carry bulkier and larger items than is normal with a convertible. 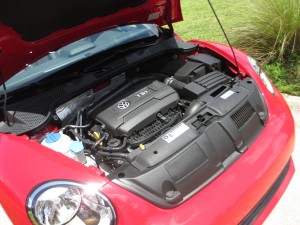 The Beetle models feature a new EA888 Gen 3 turbocharged and direct-injected four-cylinder engine that is made in Silao, Mexico. This 1.8-liter engine produces 170 horsepower and 184 pound-feet of torque—the same power, but seven pound-feet more torque, delivered lower in the engine speed range than the 2.5-liter five-cylinder powerplant. The EPA estimated fuel economy rating is 24 mpg city and 32 mpg highway, an improvement of five mpg on the highway over the 2.5-liter engine.

The EA888 Gen 3 engine family is designed to be lighter and more fuel efficient than the Gen 2 units. Engine weight has been reduced by eight pounds, to 290 pounds overall. Among the improvements on this engine are: a thinwall crankcase casting; exhaust headers that are integrated into the cylinder head; smaller diameter main bearings; roller bearings for the twin balancer shafts; and a crankshaft that has four counterweights instead of eight.

The latest version of the EA888 TSI engine, in 2.0-liter form, also powers the R-Line models. This award-winning double-overhead cam, 16-valve, 2.0-liter turbocharged inline four-cylinder engine produces 210 hp and 207 lb-ft of torque. While it gives the Beetle R-Line exhilarating performance, it is also highly efficient. With the DSG transmission, the R-Line gets EPA estimated fuel economy of 23 mpg city and 29 mpg highway; for the R-Line with six-speed manual, the figures are 21 mpg city and 30 mpg highway.

The Beetle TDI uses the company’s 2.0-liter turbocharged, direct-injection Clean Diesel engine that makes 140 horsepower and 236 pound-feet of torque. The car has an EPA estimated fuel economy rating of 28 mpg city and 41 mpg highway when equipped with the manual transmission, making it one of the most economical convertibles on the highway today.

Dual-clutch transmission advantages: DSG combines the comfort and ease-of-use of an automatic with the responsiveness and economy of a manual. The six-speed, transversely-mounted DSG unit features two wet clutches with hydraulic pressure regulation. One clutch controls the “odd” gears—first, third, fifth and reverse—while the other operates the even gears. Essentially it is two gearboxes in one.

With DSG, the set-up allows the next-higher gear to be engaged but remain on standby until it is actually selected. In other words, if the Beetle is being driven in third gear, fourth is selected but not yet activated. As soon as the ideal shift point is reached, the clutch on the third-gear side opens, the other clutch closes and fourth gear engages under accurate electronic supervision.

Since the opening and closing actions of the two clutches overlap, a smooth gearshift results and the entire shift process is completed in less than four-hundredths of a second. In addition to its fully automatic shift mode, DSG has a Tiptronic® function to permit manual gear selection.

All Beetle Convertible models are fitted with a strut-type front suspension with lower control arms and an anti-roll bar: on the R-Line’s sport suspension, the bar’s diameter is increased from 22 mm to 23 mm. At the back, all models get a multi-link independent rear suspension with coil springs, telescopic dampers, and an 18-mm-diameter anti-roll bar. 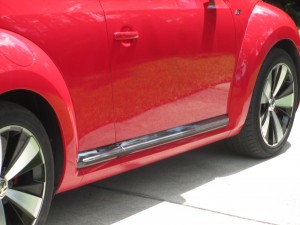 To help ensure that power is applied properly in challenging conditions, the R-Line model features the XDS® cross differential (limited-slip) system that electronically monitors input from various wheel sensors and, in the event of slippage, transfers extra torque to the wheel or wheels with the most traction.

The starting point in the Beetle Convertible’s safety armory is a rigid body structure that uses seamless laser welds and ultra-high-strength hot-formed steels in the crash-load paths.

In a convertible, it’s important to have protection in the event of a rollover accident, which Volkswagen has addressed with a reinforced front roof crossmember, strengthened A-pillar, and the Automatic Rollover Support System. Two roll-over bars are concealed behind the rear bench seat-back, activated by the computer that deploys the airbags in the case of a crash. Along with the fixed A-pillars, they help to provide effective protection for the occupants of all four seats within milliseconds. Front and head-thorax airbags are also among the standard equipment. 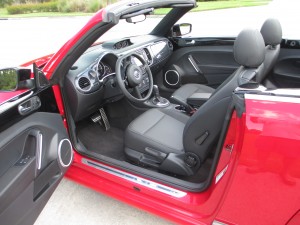 The Beetle Convertible includes Volkswagen’s advanced Intelligent Crash Response System that shuts off the fuel pump, unlocks the doors, and switches on the hazard lights if the car is involved in certain types of collision.

The Beetle Convertible is also covered under the no-charge Carefree Maintenance Program. Scheduled maintenance is covered for two years or 24,000 miles, whichever occurs first. Additionally, all current Volkswagen vehicles use synthetic oil, which, when combined with state-of-the-art German engineering, eliminates the need for a 5000-mile oil change, and allows owners to go farther between scheduled oil changes. 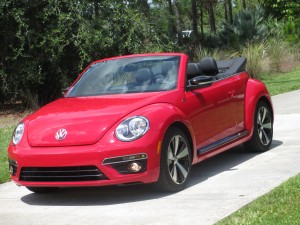 Beetle Convertible with Sound and Navigation

With a base price of $30,095, this version takes the TDI Clean Diesel’s standard equipment and adds the RNS 315 navigation system, and the Fender Premium Audio System.

This package adds Keyless access with push-button start; the Premium VIII touchscreen radio; the Fender Premium Audio System; and SiriusXM Satellite Radio. The base MSRP is $30,695. 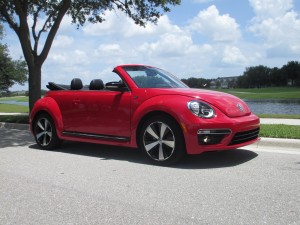 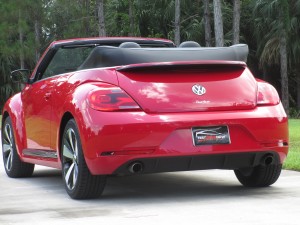 CLICK HERE to get a FREE ONLINE PRICE QUOTE for your NEW VOLKSWAGEN from a dealer near you. Absolutely NO OBLIGATION.