Posted on November 17, 2014 by TestDriveNow.com 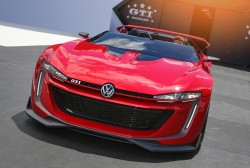 Volkswagen will show the spectacular GTI Roadster concept car in North America for the first time at the Los Angeles International Auto Show. First seen at the Wörthersee enthusiast festival in Austria in May, this car erases the boundaries between the virtual and real worlds and further demonstrates the bandwidth of the Modular Transverse Matrix (MQB) architecture that underpins the new Golf, Golf GTI, e-Golf, and Golf R models. 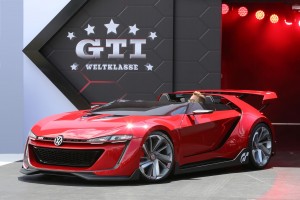 The GTI Roadster is a Golf GTI show car that was originally created as a purely electronic CGI entity for the Sony PlayStation®3 classic “Gran Turismo 6” (“GT6”). The two-seat convertible is powered by a 3.0-litre V6 twin-turbocharged TSI® engine that produces 503 horsepower and a mighty 413 pound-feet of torque between 4,000 and 6,000 rpm; from just 2,000 revs, 369 lb-ft of that torque is available. The power of the TSI engine is transferred to the 20-inch wheel-and-tire combination via a seven-speed DSG® dual-clutch automatic transmission and a 4MOTION® all-wheel-drive system. The lightweight, 3,133- pound sports car sprints from 0 to 60 mph in an estimated 3.5 seconds and goes onto a top track speed of 192 mph.

Volkswagen and Sony. The GTI Roadster is the result of cooperation between Volkswagen and Sony Computer Entertainment. Klaus Bischoff, Head of Design at Volkswagen remarks: “When Sony asked us if we would develop a Vision GTI vehicle exclusively for the game to mark the 15th anniversary of Gran Turismo we didn’t hesitate for a moment.” An in-house competition was immediately launched and young Volkswagen designers submitted their designs. The submissions were judged by Bischoff and none other than Kazunori Yamauchi, Director of Polyphony Digital and Vice-President of Sony Computer Entertainment—and the inventor of the “Gran Turismo series”.

Yamauchi is a GTI fan. The Japanese executive has his own stable of sports cars that includes a Golf GTI, the iconic sporty compact. Bischoff and Yamauchi finally chose two designs, which were then developed further. Designers Malte Hammerbeck and Domen Rucigaj were in charge of developing the exterior, whilst Guillermo Mignot was responsible for the interior. The entire development process was realized on the computer and even the 3D model of the vehicle was virtual.

Together, the three colleagues formed a sort of “Vision GTI -GT6 task force”, working with other designers. Just a few weeks later, their GTI Roadster was ready. Sony and Volkswagen unveiled the version for the virtual world of PlayStation®3 on 26 May and three days later, Volkswagen unveiled the real GTI Roadster at the GTI festival in Reifnitz, Austria as a tribute to fans of the Golf GTI and of “GT6”. From mid-June, “GT6” players were able to download the GTI Roadster, Vision Gran Turismo for PS3.

Most spectacular GTI ever. Since Volkswagen designers gave their imagination free rein in designing the “GTI Roadster” for the “GT6” game—and were able to overlook production constraints like price and production feasibility—the resulting car is certainly the most spectacular Golf GTI ever. Klaus Bischoff: “The Vision GT project offered a wonderful opportunity to sketch out extreme ideas and design elements of the GTI that are portrayed as vibrantly, dynamically and emotionally as possible. Further development of an unmistakable design and a love for detail reflect the high standards shared by the Volkswagen GTI and the ‘Gran Turismo’ by Sony PlayStation® product brands.” 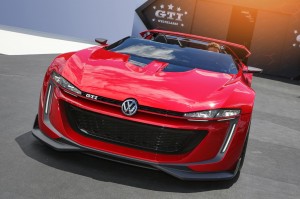 In designing the GTI Roadster, Volkswagen revolutionized the visual concept of the Design Vision GTI concept car that was presented at Wörthersee and the Los Angeles Auto Show in 2013. It was further developed, reinvented and sent into the future as a roadster, although there is still a link to the earlier car since Volkswagen used the Design Vision GTI to show how a race version of the Golf GTI might look. Like the Design Vision GTI, the Roadster keeps the principles of Volkswagen’s Design DNA and also incorporates the wild C-posts and side skirts, but expressed to a whole new level.

Both concept cars show the potential of Volkswagen’s Design DNA, and that the GTI will be around for a long time to come. The goal of the GTI Roadster was to push the Design Vision GTI concept to even greater extremes. The 98.2-inch wheelbase of the Roadster is significantly shorter than that of the production GTI and the “Design Vision GTI”. With its minimal overhangs, low, 42.9-inch height, and 74.6-inch width, the 163.7-inch-long Roadster has jaw-dropping proportions.

Exterior design
The design of the GTI Roadster launches the GTI far into the future. The visual image of the visionary two-seater already promises a direct, visceral driving experience. The driver sits in the monocoque and races around the tracks of the GT6 world from the height and perspective of a formula race car.

The roadster body was aerodynamically optimized, with the most prominent visual feature being the large rear wing. This creates plenty of downforce that aids traction, along with the all-wheel-drive system. Ahead of the wing, the C-pillars—which are a defining design element of the Design Vision GTI, extending into the roof—form a roll-over bar. The rear spoiler gives the appearance of a wing hovering behind the roadster.

The GTI Roadster sports a radiant, intensive red metallic color, a new interpretation of the classic Golf GTI “Tornado Red”. Designers gave the name “Gran Turismo Red” to the new color. Malte Hammerbeck says: “We were looking for a very provocative and aggressive red. The car should look fast, even when it is standing still, and the paint should emphasize its surface contours.” All bolt-on parts are designed in matte carbon as an accent that complements the high-gloss red of the body. Only the radiator grille and the screen over the engine compartment vent are finished in high-gloss black.

The doors swivel up and forward, visually splitting a prominent character line into an upper and lower half. The contours of the doors are also very distinctive, because they are framed by the side skirts (trimmed with the “Gran Turismo” badge at the rear), the C-pillar and the heavily flared wheelarches. A small but exclusive detail on the sides is the illuminated GTI badge that is integrated in the “tornado” line. On the upper door section, the side window forms a line that rises forward with the low-profile windscreen, like a speedboat’s.

Front end design: Viewed directly from the front, the roadster looks like a Golf GTI—except, one from the future. The GTI front end has a three-dimensional design with bumper elements that appear to hover and a splitter that is designed to increase downforce at the front end. Classic Golf GTI design elements such as the prominent VW badge, the red radiator cross strip, and GTI logo are offset by dual LED headlights and LED daytime running lights that have an unmistakable light signature. On the race courses of the GT6 world, this unmistakable and charismatic front-end will cause some uneasiness when competitors see it approaching in their digital rear-view mirrors. The closer the GTI approaches, the more noticeable is its wedge-shaped air scoop on the hood.

Sculpted rear section. Viewed from the rear, the carbon blades at the front continue uninterrupted across the side skirts and into the rear section as a wrap-around element. At the rear, they serve as aerodynamically optimized air ducts. The rear diffuser is highlighted by metal slats and two low-slung rear lights. The trapezoidal dual exhaust tailpipes (with GTI badging) are positioned in the middle of the car above the diffuser. Adding to the layered look at the back are the narrow three-dimensional lights and the spoiler above it.

Interior design
The driver and passenger sit in a carbonfiber monocoque. The two sides are partitioned by an open bar that ascends from rear to front, with a fire extinguisher beneath it. The GTI Roadster is equipped with two race-style buckets, placed low. The seats and the four-spoke grip-style steering wheel are covered with Alcantara. Another motorsport-style feature is the cockpit display mounted directly to the steering column, far ahead of the driver. The steering wheel is mounted on a very long, exposed steering column, which is typical of a race car too. Designers located the red, illuminated rotary light switch and shift paddles to the left and right of the steering wheel’s central axis, so the driver never has to move his or her hand off the wheel.

The interior and exterior materials and colors were intentionally differentiated: the typical GTI red is used for some interior accents, such as the five-point safety belts, contrasting stitching on the seats, the door handles and the steering-wheel controls on the steering wheel, but the rest of the color selections were trimmed to “Black” and “Anthracite”. Inside the GTI Roadster, most decorative elements were omitted in favor of an uncompromising motorsport ambience so that the driver can focus exclusively on both the real and virtual race track.

CLICK HERE to get a FREE ONLINE PRICE QUOTE for your NEW VOLKSWAGEN from a dealer near you. Absolutely NO OBLIGATION.