Posted on February 26, 2014 by TestDriveNow.com 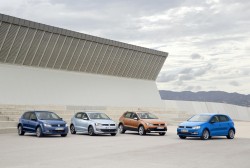 Wolfsburg/Geneva – Volkswagen presented the latest iteration of the Polo in January. The new EU-6 engines as well as the new infotainment and assistance systems of the best-seller, in particular, have now taken huge strides forward in terms of technology. Background: The fuel consumption values were lowered by up to 21 per cent; the infotainment and assistance systems introduce the technology usually preserved for cars much larger than those of the Volkswagen Polo segment. Just one month after the debut of the classic “Trendline,” “Comfortline” and “Highline” Polo equipment versions, now come – as world premieres at the Geneva Motor Show – the Polo TSI BlueMotion, Polo TDI BlueMotion, Polo BlueGT and CrossPolo models. Moreover, Volkswagen is presenting the new R-Line exterior and interior packages for the Polo. The models at a glance: 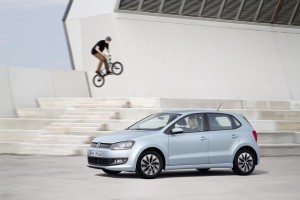 Polo BlueMotion. Up to now, the Polo BlueMotion – one of the most efficient five-seat passenger cars in the world – was only available as a turbodiesel. Later this year, this trendsetter in terms of fuel-efficiency will also launch as a Polo TSI BlueMotion (66 kW / 90 PS) with a turbocharged petrol engine; this is the first time that Volkswagen has used this new three-cylinder engine. With a combined fuel consumption of 4.1 l/100 km, the Polo TSI BlueMotion sets a new benchmark for petrol cars in its class. The Polo TDI BlueMotion sets a record in the market for five-seat diesel cars: The three-cylinder engine (55 kW / 75 PS) consumes only 3.1 l/100 km. 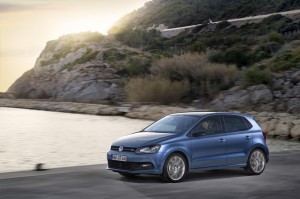 Polo BlueGT. Thanks to the cylinder shut-off (ACT or active cylinder management) used exclusively for this engine, it offers maximum dynamic performance together with maximum fuel efficiency. And this performance has been boosted as well, since the new version of the Polo BlueGT now develops a maximum output of 110 kW / 150 PS instead of the previous 103 kW / 140 PS. 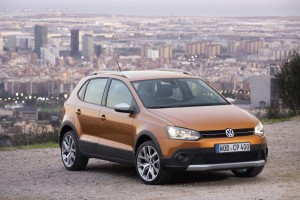 Polo R-Line packages. The R-Line programme delivers more dynamism. It is available in the Polo Comfortline and Polo Highline equipment versions. The R-Line features that are available as exterior and interior packages – for example bumpers, sports seats and steering wheels – were tuned for the latest Polo.

New levels of fuel-efficiency, comfort and safety. As indicated above, all new Polo cars – including the Polo TSI BlueMotion, Polo TDI BlueMotion, Polo BlueGT and CrossPolo models – offer a range of driving, convenience and safety technologies which is unique in this class: A new electro-mechanical servo steering system improves steering properties. Volkswagen will be at the starting line with the newly developed Sport Select suspension, which uses electronically controlled dampers so that drivers can choose between two tuning characteristics at the push of a button (not available on the Polo BlueMotion or CrossPolo). In tandem with this, assistance systems have been introduced into the Polo programme such as the standard Automatic Post-Collision Braking System (automatically initiates braking after a collision) and the optional Driver Alert System, Front Assist ambient traffic monitoring system with City Emergency Braking and Adaptive Cruise Control (ACC). The view towards the rear can now be sharpened by the optional Rear Assist rear view camera as well. Also new are the controls for the climate control system.

Progressive infotainment world. The infotainment line-up was also reconfigured. It consists of three radio/CD systems (“Composition Touch,” “Composition Colour,” “Composition Media”) and a radio/CD navigation system (“Discover Media”). Depending on the version, the devices offer functions such as Bluetooth audio streaming (with a smart phone, including cover display and touchscreen control), a proximity sensor (other menu details are shown when hand approaches the screen), two-finger map zooming in navigation mode (like on a smart phone) and interfacing of the mobile phone to the vehicle’s exterior antenna by inductive coupling. All systems can be equipped with digital radio reception (DAB+). In addition, special smart phone apps can be accessed on the touchscreen via MirrorLink™.