Posted on October 2, 2015 by TestDriveNow.com 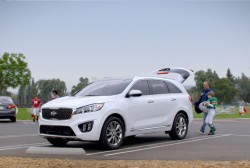 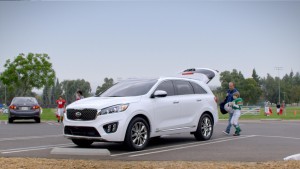 The long wait is over – football is back, and Kia Motors America (KMA) returns for its second season of “NBC Sunday Night Football” to extend the marketing campaign for the redesigned 2016 Sorento CUV, beginning October 4. After the Sorento made the “Perfect Getaway” during the Big Game, the new campaign takes a lighthearted approach to prove Kia’s largest CUV is capable of handling anything football families throw at it.

The three ad spots – “Participation,” “Great Game” and “Pants” – each focus on a key Sorento feature in addition to real life football situations. By showing the contrast between the way real football parents are expected to act and what’s really going on in their heads, Kia executes a humorous campaign that breaks through the football clutter in a way that no other car brand has done.

Created by David&Goliath, Kia’s advertising agency of record, the Sorento spots can be viewed on television during Sunday Night Football broadcasts on NBC. The campaign highlights desirable features of the vehicle, including cargo space, its comfortable cabin and all-wheel drive capabilities.

About the 2016 Kia Sorento
The completely redesigned 2016 Sorento CUV, which raises the bar on the segment with its refinement and first-class amenities, is larger and more capable than ever with more room for passengers and cargo.  Standard premium features and luxurious amenities span the line of five trim levels and the Sorento is now offered in three engine choices, including a 240 hp 2.0L turbo-charged inline-4.  The Sorento is built at the brand’s U.S. manufacturing plant* – Kia Motors Manufacturing Georgia – in West Point, Georgia.