Posted on November 10, 2014 by TestDriveNow.com 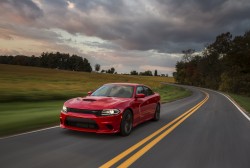 In its auto show debut at the 2014 South Florida International Auto Show in Miami late last week, the 2015 Dodge Charger SRT Hellcat was awarded the “Star of the Show” from the Southern Automotive Media Association (SAMA). 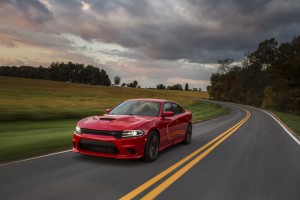 “The new Dodge Charger SRT Hellcat has quickly captured the world’s imagination,” said Bill Adam, SAMA president. “Other automotive manufacturers have made high horsepower vehicles over the years, but none comes close to this one. Dodge has built a family capable performance sedan that is sinister and powerful looking, while still able to achieve impressive gas mileage, making this car the 2014 Star of the Show.”The new 2015 Dodge Charger SRT Hellcat is powered by the new supercharged 6.2-liter HEMI® V-8 engine. Its 707 horsepower matches the highest rating of any V-8 engine in Chrysler Group’s celebrated history – that of the 2015 Dodge Challenger SRT Hellcat – making it the quickest, fastest and most powerful production sedan in the world, as well as the most capable and technologically advanced four-door muscle car in America. The supercharged HEMI V-8 engine is mated to the new segment-first TorqueFlite 8HP90 eight-speed automatic transmission.The unrivaled four-door performance numbers tell an impressive story with an NHRA-certified, quarter mile in 11.0 seconds, 0-60 miles per hour (mph) in 3.7 seconds, 0-100-0 mph in under 13 seconds and a top speed of 204 mph.“Thanks to the Southern Automotive Media Association for this prestigious award recognizing our new ultimate performance sedan and its unrivaled capabilities,” said Tim Kuniskis, President and CEO — Dodge and SRT Brands. “We’re proud that in its auto show debut, the Dodge Charger SRT Hellcat is carrying on the buzz that began earlier this year when our Challenger SRT Hellcat surprised the muscle car world.”Additional performance attributes of the new Dodge Charger SRT Hellcat include the largest brakes ever offered in a Chrysler Group vehicle – 15.4-inch Brembo two-piece rotors with six-piston calipers, 20-by-9.5-inch wide forged-aluminum wheels with Pirelli P Zero performance tires and adaptive damping three-mode suspension.

Dodge and SRT designers have re-sculpted and refined nearly every body panel of the new Charger with functional performance cues, including heat extractors in the hood, unique front and rear fascias and dramatic LED lighting in both front and rear.

The 2015 Dodge Charger SRT Hellcat will be built at the Brampton, Ontario, Assembly Plant. Production is slated to begin in the first quarter of 2015. 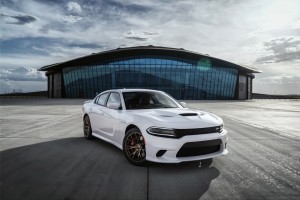 CLICK HERE to get a FREE ONLINE PRICE QUOTE for your NEW DODGE from a dealer near you. Absolutely NO OBLIGATION.