As long as everyone wants one, automakers will oblige. So here comes the all-new 2018 Toyota C-HR – another of those very affordable, fuel efficient and flexible little crossovers like the Chevy Trax and Honda HR-V.

But unlike those competing models, the CH-R – short for Coupe High-Rider – has been designed with bolder styling and a desire to exhilarate the driver – think of it as longer, more spacious Nissan Juke.

According to Toyota, years were spent developing on-road nimbleness and ride quality on some of the world’s most curvaceous and pitted roads, including the famed Nürburgring racing circuit in Germany with the goal to achieve thrilling fun and impressive ride comfort. SACHS dampers and an all-new double-wishbone rear suspension speak to that narrative.

Eschewing turbo power, the C-HR employs a 2.0-liter 4-cylinder and a CVT to deliver its 144 horsepower and 139 pound-feet of torque to the front wheels.  This all-new transmission incorporates a Sport mode and a simulated 7-speed shift program to enhance acceleration.  Gas mileage is estimated at 27mpg city/31mpg highway. 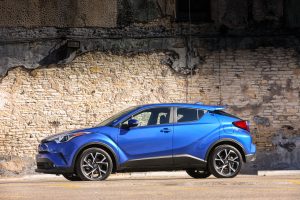 Available in XLE and XLE Premium trims with a starting MSRP of $23,460, both models come standard with Toyota Safety Sense P, making the C-HR the first in the segment to include a Pre-Collision System with Active Braking at no extra charge.

Inside, passengers can easily converse thanks in large part to the acoustic noise-reducing front windshield.  The C-HR receives two Toyota-first features: Driver Distraction Secure Audio and Brake Hold Function. DDSA prevents certain multimedia menus from being selected while the vehicle is in motion by complying with NHTSA’s Driver Distraction Guidelines. Brake Hold Function is a convenience feature that maintains braking force at all four wheels to keep the vehicle stationary when at a full stop.

For extra cargo carrying versatility, the rear 60/40 seat can split and fold flat, and, when in an upright position, can easily accommodate child seats.