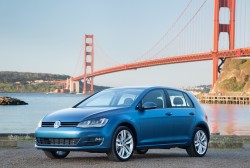 Whatever the trim level, the new Golf is better equipped than its predecessor. The limited-availability Golf Launch Edition two-door model adds numerous standard features over the outgoing Golf 2.5L including: 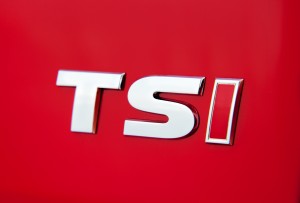 Scheduled to hit dealer showrooms in August, 2015 Golf models will be offered in two- and four-door configurations and with two powertrains: the EA888 1.8-liter turbocharged and direct-injection four-cylinder TSI® engine mated to a five-speed manual or a six-speed automatic transmission; and the all-new EA288 2.0-liter turbocharged and direct-injection four-cylinder TDI® Clean Diesel, fitted with a six-speed manual or a six-speed DSG® dual-clutch automatic transmission. 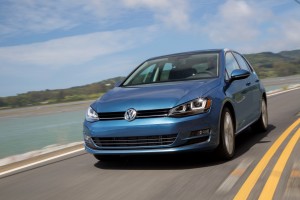 Golf TSI models equipped with the new 1.8-liter turbocharged and direct-injection four-cylinder engine will initially be available in five trim levels, with the limited availability Golf Launch Edition starting at $17,995 for the two-door model with a five-speed manual transmission. The Golf S begins at $18,995 in two-door form with a manual transmission. For consumers seeking more features, the Golf S with Sunroof begins at $20,995 and will only be available as a four-door model, while the Golf SE offers the roominess of a four-door and more content beginning at $24,495 with an automatic transmission. Like the SE trim, the top-of-the-line Golf SEL comes with four doors and an automatic transmission only and starts at $26,995.

Golf TDI Clean Diesel models only feature four doors and will be offered in three trims—TDI S, TDI SE, and TDI SEL.  With a starting price more than $3,000 lower than the previous-generation Golf TDI, the all-new Golf TDI S starts at $21,995 with a six-speed manual gearbox, followed by the Golf TDI SE which begins at $25,495 with a manual transmission. The line-topping Golf TDI SEL trim starts at $27,995 when equipped with the manual gearbox.

In addition to a long list of standard amenities, several new comfort and convenience features will be available on the 2015 Golf including the Fender® Premium Audio System and Climatronic® automatic air conditioning. 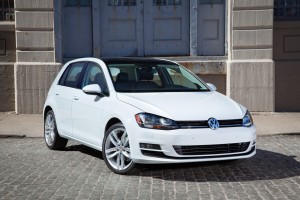 This new-generation Golf has grown in size yet dropped in weight by up to 79 pounds (depending on model), despite a plethora of new and upscale features. The new generation introduces Volkswagen’s versatile modular transverse matrix (MQB) vehicle platform to the U.S. market—a significant step in standardizing, simplifying, and improving the design and creation of products across the entire Volkswagen Group portfolio. The MQB architecture allows for a more cab-backward design, which gives the new Golf a more upscale appearance while retaining classic design cues from the Mk 1 and Mk 4 Golf models.

Dimensionally, the Golf has grown in all directions but up. Overall length has increased by 2.1 inches, while width has gained 0.5 inches. Overall height has decreased, however, by 1.1 inches. Thanks to the MQB architecture, which dictates a fixed relationship between the front-wheel centerline and the pedalbox, the front wheels now sit 1.7 inches further forward, giving a premium “cab backward” aesthetic. Along with the new design graphics and shape, these updated proportions help the Golf achieve a lower visual center of gravity and a more dynamic stance. 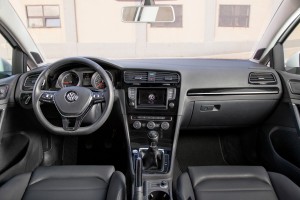 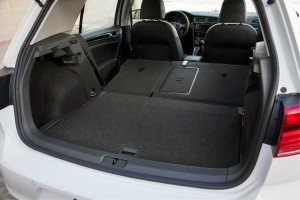 Inside, the new Golf features a larger, more refined and mature cabin with an emphasis on comfort and a substantial list of features. Despite the Golf’s lower overall height, interior space has been increased all around, with 93.5 cubic feet of interior room compared with 92.9 for the previous Golf.  The Golf’s hatchback design and MQB architecture allow for maximum comfort for the driver and passengers, while providing more trunk space than any midsize sedan available in the U.S. 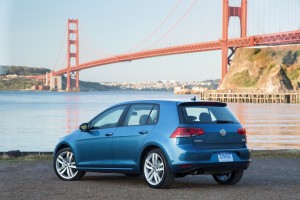 At launch, Volkswagen will also offer the Golf Sport model. About 650 of the TSI SE four-door models will be built, equipped with the six-speed automatic transmission and the Lighting Package that includes standard Bi-Xenon headlights. Offered in either Pure White or Platinum Gray, the Launch Edition is visually enhanced with a striking bodykit that includes a front lip spoiler, side skirts, a rear valence, a larger rear spoiler, and chrome exhaust tips. Pricing starts at $26,930, plus $820 destination and handling.

The seventh-generation Golf will go on sale as a 2015 model in August.  It will be built at Volkswagen’s Puebla, Mexico factory.

The Golf S with Sunroof, which is only available as a four-door model, starts at $20,995 with the manual transmission and is available with the six-speed automatic for $22,095. It adds a power tilt and slide panoramic sunroof to the S model’s extensive list of standard equipment. A Lighting Package becomes available at this trim level: for $995 it adds Bi-Xenon headlights with LED daytime running lights, ambient lighting with LED interior reading lights, and the Adaptive Front-lighting System (AFS). The $695 Driver Assistance Package adds a Forward Collision Warning system and front and rear Park Distance Control.

The line of diesel-powered Golf models largely mirrors its gasoline siblings in terms of features and packages. The introductory model is the TDI S, which starts at $21,995. Available only as a four-door model, the TDI S offers a six-speed manual gearbox and 16-inch aluminum-alloy wheels as standard, with a dual-clutch DSG automatic available for an additional $1,100.

GOLF TDI SE
The TDI SE is priced at $25,495 with the manual transmissions and $26,595 with the automatic. It adds a sunroof and the same list of equipment and optional packages as its gasoline-powered counterpart, including the Fender Premium Audio System and the cold weather package.

GOLF TDI SEL
Like the TDI SE, the TDI SEL is available with either six-speed manual or DSG transmissions. Pricing starts at $27,995, with the optional DSG adding $1,100. The standard equipment mirrors the TSI SEL, adding features such as a navigation system, Climatronic automatic air conditioning, and Keyless access with push-button start.

CLICK HERE to get a FREE ONLINE PRICE QUOTE for your new VW Golf from a dealer near you. Absolutely NO OBLIGATION.