Posted on September 25, 2014 by TestDriveNow.com 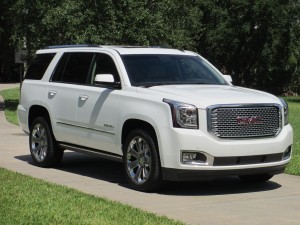 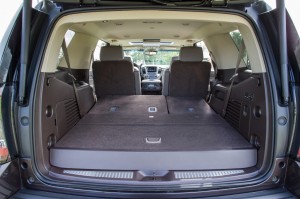 Bold styling and advanced technologies – including new safety and security technologies – support Yukon’s greater capability, while a more comprehensive list of standard features is designed to broaden the appeal of one of the industry’s most popular full-size SUV lineups. 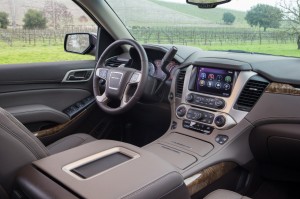 Yukon Denali’s exclusive 6.2L engine is the most powerful in the segment, with 420 horsepower and 460 lb-ft of torque. Denali models are also rated at 15 mpg city / 21 mpg highway (2WD models). 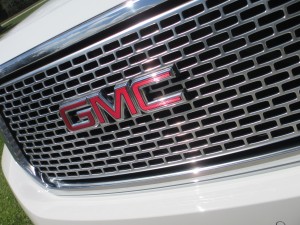 “We’ve engineered the Yukon and Yukon XL from the ground up, building on a strong legacy of capability to take them to the top of the segment with exceptional refinement and purposeful technology,” said Duncan Aldred, vice president of GMC Sales and Marketing. “And when it comes to the tasks for which people rely on a full-size SUV, they do it better than ever – and with more style.” 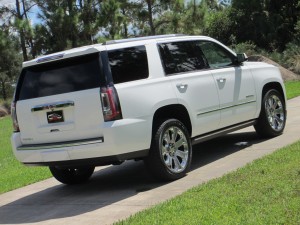 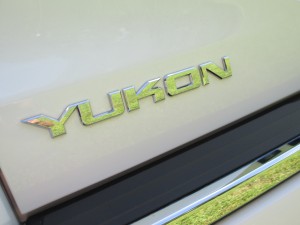 Yukon and Yukon XL share design, architectural and powertrain elements, but Yukon XL has an approximately 14-inch longer wheelbase and is approximately 20 inches longer overall, providing greater legroom for third-row passengers and more than twice the cargo room behind the third-row seat.

New and enhanced product highlights across the 2015 Yukon lineup include: 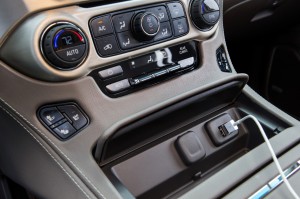 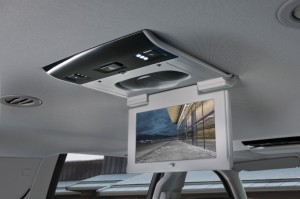 When it comes to safety, the Yukon lineup incorporates new technologies to help protect the driver and passengers before, during and after a collision. They include a forward radar system and the segment’s only Front Center Air Bag (models with front bucket seats), which deploys from the inboard side of the driver’s seat and inflates between the driver and front passenger, providing added protection for both front occupants in side-impact crashes.

Bold styling, enhanced refinement
All-new exterior and interior designs advance GMC’s professional grade credentials with elements designed to be beautiful and functional. The exteriors are sleeker and more aerodynamic, enhancing efficiency on the highway and contributing to the new Yukon’s quiet ride. 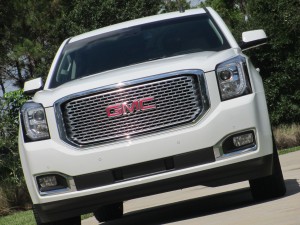 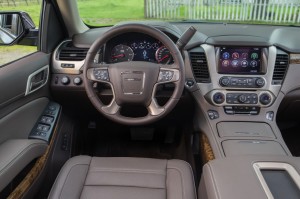 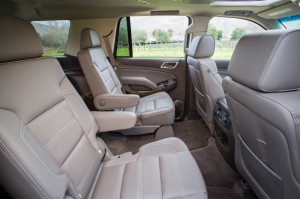 Inside, the all-new 2015 Yukon’s precisely crafted interior features a quiet cabin, authentic materials and premium infotainment choices. Examples include soft-touch instrument panel, console and door panel materials with French seam stitching and purposeful use of ambient lighting in functional areas, including first- and second-row foot wells and the center console. All models have a standard Bose sound system, seats with dual-firmness foam and an ambient air vent designed to enhance comfort for front-seat passengers. 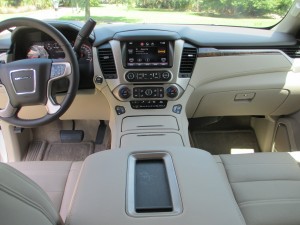 There are more storage options in the new Yukon lineup, including a compartmentalized center console large enough to store a laptop or iPad with provisions for hanging file folders and other organizational features, for customers whose vehicle also serves as a rolling office.

Compared with previous models, the driving experience of the new SUVs is further enhanced with:

IntelliLink and OnStar 4G LTE
The 2015 GMC Yukon’s next-generation IntelliLink infotainment system is better connected and offers passengers more choices for their increasingly plugged-in lifestyles. It provides easy, intuitive operation of basic functions, yet it is also highly customizable and capable of linking up to 10 devices such as smartphones, SD cards and MP3 players, giving customers more ways of staying connected. 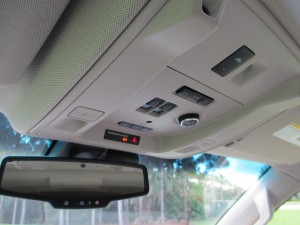 Additional standard and available features include:

OnStar with 4G LTE and standard built-in Wi-Fi hotspot provides a mobile hub for drivers and passengers to stay connected. The hotspot is on whenever the vehicle is on and comes with a three-month/three-gigabyte data trial. 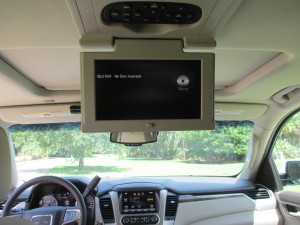 4G LTE is the most current and fastest mobile data network – 10 times faster than 3G and 100 times faster than the previous generation of OnStar hardware. And with OnStar, it also offers stronger, broader coverage than smartphones on the same network and it’s easy to use: If the vehicle is on, the connection is on.

At the time of purchase, six months OnStar Directions and Connections includes all of OnStar’s advisor-based safety and security features, including Automatic Crash Response and Stolen Vehicle Assistance, as well as turn-by-turn navigation. 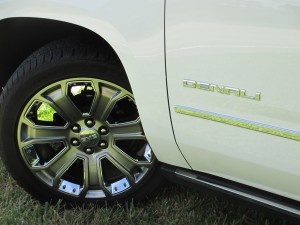 The OnStar with 4G LTE connection will arrive later in the 2015 model year.

Advanced engine technology
The all-new Yukon family is more powerful and efficient than before, thanks to the new EcoTec3 engine family, which debuted in the 2014 Sierra. A 5.3L V-8 is standard in Yukon and Yukon XL models and an exclusive 6.2L engine is standard in Denali models, delivering the segment’s best horsepower and torque – SAE-certified 420 horsepower (313 kW) and 460 lb-ft of torque (623 Nm). 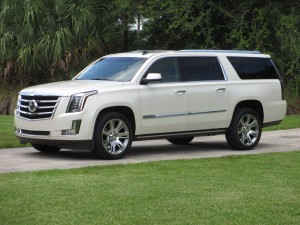 The EcoTec3 engines feature state-of-the-art technologies, including direct injection, cylinder deactivation, continuously variable valve timing and an advanced combustion system, designed to make the most of power, torque and efficiency across a broad range of operating conditions. More precisely controlled combustion enables the new engines to run with a higher compression ratio, which delivers greater power and efficiency.

Both engines are matched with the Hydra-Matic 6L80 six-speed automatic transmission.

Safety technologies
The new, 2015 GMC Yukon models are equipped with new standard and available driver-alert technologies that add layers of crash-avoidance protection, as well as enhanced occupant protection in the event a crash occurs. They include the segment’s first Front Center Air Bag (front bucket seat models). This feature deploys from the inboard side of the driver’s seat and inflates between the driver and front passenger, providing added protection for both front occupants in side-impact crashes.
Active safety features use camera, radar and ultrasonic sensors to provide alerts and intervene when necessary to help avoid crashes, including an available safety alert seat that vibrates if the system determines the driver is at risk of colliding with another vehicle. Driver assistance begins with a standard rear vision camera that shows the area immediately behind the vehicle in the audio system screen. The camera is especially helpful when hooking up a trailer. 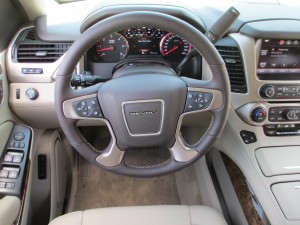 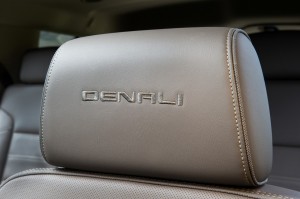 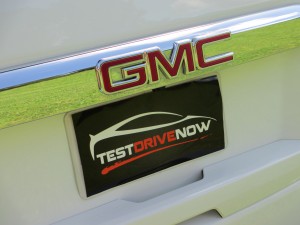 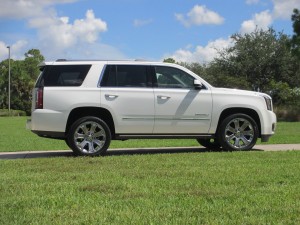 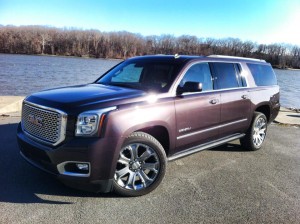 CLICK HERE to get a FREE ONLINE PRICE QUOTE for your NEW GMC YUKON from a dealer near you. Absolutely NO OBLIGATION.