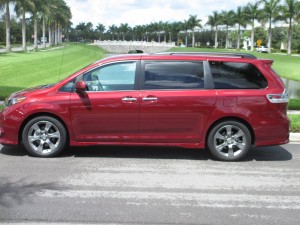 The 2014 Toyota Sienna, the only family van sold in the U.S. that offers an available all-wheel drive system, for 2014 offers the Blind Spot Monitor as a standalone option for the SE model. Previously for the SE grade, it was available only as part of option packages. The feature, which includes cross-traffic alert, remains standard on the Sienna Limited grade. 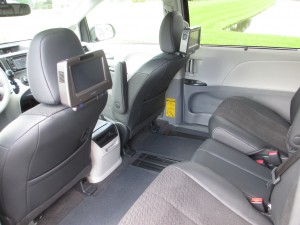 The Sienna is available in seven- and eight-passenger configurations. Bolstering this family van’s already considerable versatility, the Tow Prep Package has been made standard on all grades. All 2014 Sienna models come standard with a 266-horsepower, 3.5-liter V6 engine teamed to a six-speed automatic transmission. The combination yields impressive merging and passing power as well as a 18-mpg city / 25-mpg highway EPA fuel economy rating on FWD models. The Sienna can tow a trailer up to 3,500 pounds.

Stand-Apart Design
The sculpted shape of the Toyota Sienna gives it a strong road presence and also excellent aerodynamics for low wind noise. Distinctive window shapes and sliding door tracks hidden within the side window frames complement the sleek profile.

The Sienna treats occupants to upscale quality and elegance, yet with outstanding functionality and ease of use. The distinctive swept shape of the dashboard makes the spacious cabin feel even roomier. The seat designs add flexibility and roominess, while central climate and audio controls are integrated into a single control surface. 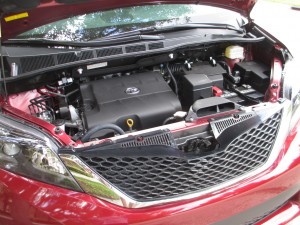 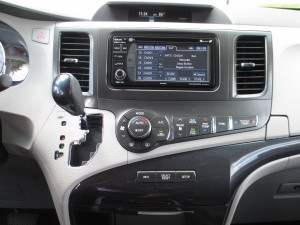 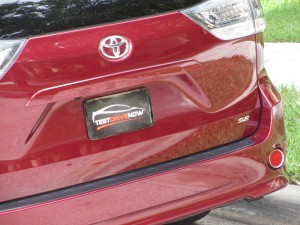 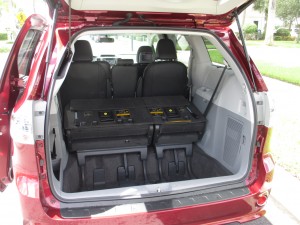 Sporty SE
Who says a family van can’t be fun and sporty? The Sienna SE looks the part with a bolder front appearance, while the side skirting visually lowers the vehicle and hugs the standard 19-inch alloy wheels. LED taillights with smoked sport trim and chrome-accented outside door handles make a distinctive statement. 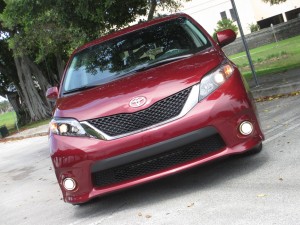 Just as important, the Sienna SE drives with a sporty demeanor thanks to a lowered, sport-tuned suspension that, in conjunction with the 19-inch wheels, provides sharper handling agility. Exclusive instrumentation and unique interior colors and trim complete the package.

Interior Versatility
All occupants enjoy an airy, roomy ambiance in Sienna thanks to its outstanding all-around visibility. A conversation mirror integrated into the sunglass case in the overhead console provides the driver with convenient visual contact with rear seat passengers. Numerous storage bins, cupholders and cargo spaces are placed in convenient locations.

Both seven- and eight-seat cabins can be configured for a full contingent of passengers, a load of cargo, or a mix of both. In seven-seat cabins, the second row captain chairs can slide 23 inches, moving to the rear to create legroom for the tallest passengers and easier ingress and egress. Or, the seats can be moved forward close to the front seats to make it easy to reach a child passenger, while also allowing easy access for third-row passengers. 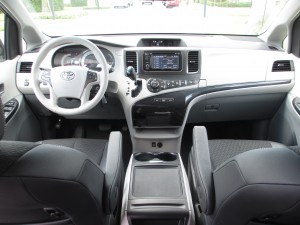 A sliding center console on the XLE all-wheel-drive and Limited grades can be shared between the front seats and second row passengers. The illuminated console slides into the second row area to provide convenient access for both rows. For even greater passenger comfort, the standard second-row 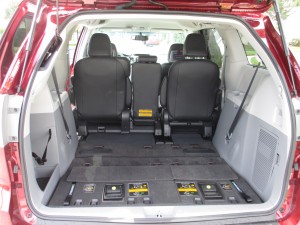 On eight-passenger models, the second row center seat can be removed and stowed in the left side of the rear-storage area. When the center seat is stowed, a cupholder and storage tray is revealed. The eight-passenger interior can easily be converted for seven passengers.

The second-row seats also feature a Tip Up and Long Slide feature, allowing them to slide forward and back on extended rails, making more room for passengers or cargo. All second-row seats, regardless of configuration, move out of the way with one touch to gain easy access to the third-row seats. 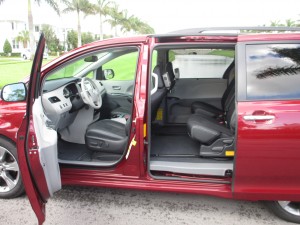 A wide tailgate and wide side doors, low floor height and one-touch second-row seats make it easy and convenient to load the Sienna. Sliding the second-row seats all the way to the rear creates a walk-in aisle, making it easier to enter, exit, install a child seat, or place a child in a seat.

The available rear-seat Dual View Entertainment Center uses two displays side-by-side to create a seamless 16.4-inch widescreen image from a single source. The system can split the screen into two individual displays, each with input from separate sources. Used as a single screen, it can be easily seen from the third row, and it can be operated from any seat via remote control. 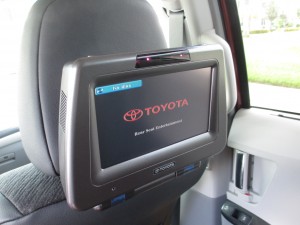 Used as two screens, the system can accommodate the preferences of two separate passengers who might want to play a video game or watch a second DVD simultaneously via auxiliary inputs. Other upgrades include the Panorama Camera rear monitor with a 180-degree view and on-screen back-up guides to help the driver back into parking spots or driveways.

Safety
The standard Blind Spot Monitor on XLE and Limited grades uses sub-millimeter wave radar designed to detect vehicles that are within the systems blind spots. When the system detects a vehicle in the adjacent lane, it alerts the driver using indicators on the side mirrors. If the turn signal is on when there is a vehicle in the blind spot of the driver’s intended lane, the indicator on the corresponding mirror will flash. The system incorporates a cross traffic alert, which can be especially helpful when backing out of a driveway or parking slot. 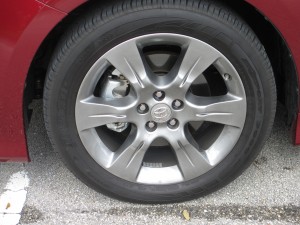 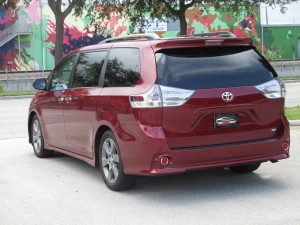 Seven airbags come standard, including dual-stage front airbags and seat-mounted side airbags for the driver and front passenger, plus a segment-first driver’s side knee airbag. Side curtain airbags cover the length of the cabin, from the front seats to the third row. Active headrests in both front seats help to reduce the possibility of whiplash in a collision. 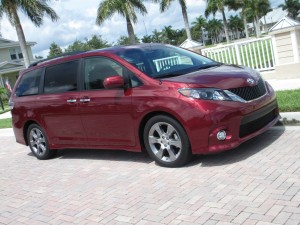 A Pre-Collision System (PCS) with pre-collision seatbelt system is an available option on the Limited grade, as is Vehicle Dynamics Integrated Management (VDIM). The VDIM system coordinates brake control with engine output and steering inputs, allowing all the control and safety systems to coordinate seamlessly. Unlike reactive traction systems, VDIM operates proactively. During normal driving, the system works smoothly to enhance control even before the vehicle reaches its limits. 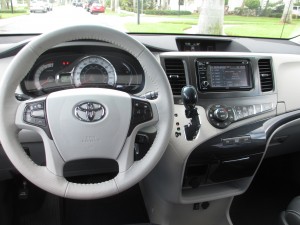 The Safety Connect™ telematics system comes with a one-year complimentary trial subscription on Sienna Limited and is optional on XLE. Safety Connect offers four safety and security features: Automatic Collision Notification, Stolen Vehicle Location, Emergency Assistance Button (SOS), and Roadside Assistance. Automatic Collision Notification is designed to automatically call a response center in case of airbag deployment or a severe rear-end collision. If a response agent cannot communicate with the occupants, the agent can contact the nearest emergency-services provider to dispatch assistance. Pushing the in-vehicle “SOS” button allows drivers to reach the response center to request emergency help as well. If a Sienna equipped with Safety Connect is stolen, agents can work with local authorities to help locate and recover the vehicle once a stolen vehicle report is filed. 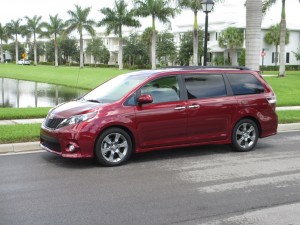 Toyota’s 36-month/36,000 mile basic new-vehicle warranty applies to all components other than normal wear and maintenance items. Additional 60-month warranties cover powertrain for 60,000 miles and corrosion with no mileage limitation. 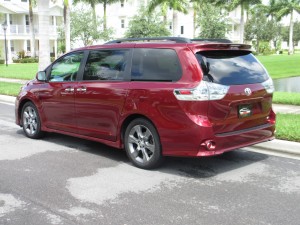 CLICK HERE to get a FREE ONLINE PRICE QUOTE for your NEW TOYOTA from a dealer near you. Absolutely NO OBLIGATION.