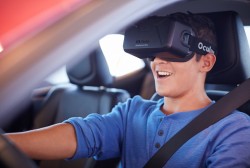 Today at the Detroit Auto Show, Toyota launched its newTeenDrive365 distracted driving simulator with Oculus Rift, marking the first time the virtual reality technology is being used to educate the public – teens and parents alike – about the dangers of distracted driving. A video of the wholly immersive virtual reality experience can be found here – www.toyota.us/14WI1B9 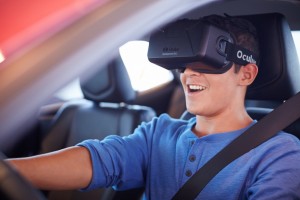 To experience the new TeenDrive365 simulator you get behind the wheel of a stationary Toyota car, put on the Oculus Rift headset and are wholly immersed in a virtual reality driving experience, complete with the three dimensional sights and sounds of a busy city street. During the simulation, you are challenged to drive safely using the car’s steering wheel and pedals, while navigating a series of common distractions, including traffic noises, the radio, text messages and virtual friends who occupy the passenger and back seats. Lose your focus and you’ll experience the consequences of distracted driving within the virtual setting. But hopefully you’ll come away a little wiser about what it takes to be safe behind the wheel.

“Oculus Rift provides a virtual reality driving experience that mirrors real life behind the wheel, giving us a powerful, one-of-a-kind way to show parents and teens how everyday distractions can affect their ability to drive safely,” said Marjorie Schussel, Corporate Marketing Director for Toyota. “This is just the latest example of how we’re helping teens and parents become safer drivers together through our ongoing TeenDrive365 initiative.”

Oculus Rift’s custom technology allows TeenDrive365 to offer a virtual experience that surpasses any other distracted driving simulation available to the public.

The new simulator is part of TeenDrive365 (www.TeenDrive365.com), Toyota’s comprehensive initiative that offers online tools, expert advice, local events and social media elements to help parents model safer driving behaviors for their teens. The focus on parents as role models is based on research from a national study from Toyota’s Collaborative Safety Research Center (CSRC) and UMTRI. The study found a significant correlation between how parents and their teens drive, suggesting that parents are the biggest influence on how a teen will behave behind the wheel.

Since TeenDrive365’s launch in November 2013, millions of people have engaged with its online and in-person resources. More than 10,000 have experienced the first iteration of its driving simulator, with nearly 80 percent saying they would reduce distractions because of the experience.

The new Toyota TeenDrive365 distracted simulator with Oculus Rift was developed by Brightline Interactive in partnership with 360i. TeenDrive365 was created by 360i, with support from Finsbury (PR) and The PEERS Foundation (Events).

The new Toyota TeenDrive365 distracted driving simulator with Oculus Rift will be available free of charge to the public at auto shows across the country. For a full list of dates, visit
www.Events.TeenDrive365.com.