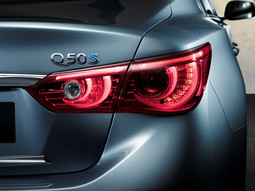 NASHVILLE, Tenn. (June 25, 2013) – Infiniti today announced full U.S. pricing on the 2014 Infiniti Q50 sports sedan, which goes on sale at Infiniti retailers nationwide in early July. The all-new Q50 is designed for a new generation of…

Standup: Though the V8 has become a rarity, luxury nameplates like Infiniti still use them as top-billing on their most prestigious cars.  And the brand’s halo, the M56, packs the power of 420 horsepower and all-wheel drive. When the M…

The Infiniti Performance Line debuted for the 2011 model year but only on the G37 Coupe.  Those choices have now expanded to include an IPL G Convertible as well.  This car very much reminded me of the G37 Convertible Anniversary…