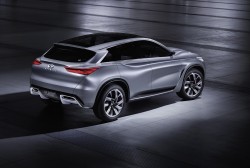 Flowing lines and advanced craftsmanship characterize the spacious and beautifully appointed interior, which follows Infiniti’s “driver-centric, passenger-minded” approach to cabin architecture. The interior’s color palette – predominantly black and white with flashes of the hide’s natural tan color – is striking, yet harmoniously blended through careful use of line, form, and texture.

“The QX Sport Inspiration is a statement of intent from Infiniti, showcasing a daring design philosophy and a demonstration of our capabilities in the mid-size SUV segment.” Roland Krueger, President of Infiniti

With the QX Sport Inspiration, Infiniti has started to explore the potential to expand its portfolio in the mid-size SUV market – one of the world’s largest and fastest-growing premium segments.

Infiniti boasts a strong history in SUV design – the pioneering Infiniti FX45, launched in 2003, set the template for sporting SUVs over the following decade. Regarded as the world’s first mid-size multi-purpose sports vehicle, the FX is still considered an SUV design icon today. In an increasingly crowded and popular market segment, the QX Sport Inspiration seeks to build on Infiniti’s SUV heritage and generate further excitement for the brand.

“The QX Sport Inspiration comes at a time when Infiniti continues to expand its product portfolio globally – into new and popular segments. We design concept cars with true production potential, and the QX Sport Inspiration offers a vision of how Infiniti could bring something exciting and new to the mid-sized SUV segment.” Francois Bancon, Infiniti Vice President Product Strategy

“The QX Sport Inspiration expresses power and purpose through what we describe as its ‘proportional clarity’, with an elegance that is uniquely Infiniti. The exterior design will appeal to an artistic sensibility. It has a more flowing, natural aesthetic than that evident in traditional premium SUVs.” Alfonso Albaisa, Infiniti Executive Design Director 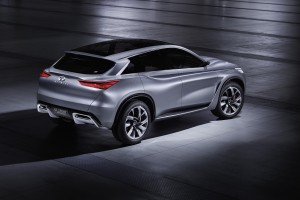 Inspired by Infiniti’s Powerful Elegance form language, taut lines, short overhangs and muscular haunches endow the QX Sport Inspiration with a purposeful aura that hints at its dynamic capability. The long, smooth hood draws the eye back over the vehicle and the visual weight builds over the car’s haunches to reinforce the “lean-forward” stance.

The concept promises off-road versatility, aided by its raised, 230 mm (9.1 in) ground clearance, as well as the empowering, in-control on-road driving characteristics and cruising comfort that is expected of any Infiniti. The concept features a lean, purposeful form, with a short front overhang and wide stance – total width (excluding rear-view cameras) is 1,900 mm (74.8 in), while length is 4,600 mm (181.1 in).

Infiniti has launched a number of new models recently which adhere closely to the form and philosophy of concept models – notably the Q30, the QX30 and the Q60. All share a suite of signature design cues that help ensure each is immediately recognizable as an Infiniti.

The QX Sport Inspiration evolves these signature design elements, including a new interpretation of Infiniti’s hallmark “crescent-cut” C-pillar, where the leading edge of the crescent is raised – echoing that of the acclaimed Q80 Inspiration Concept. Bringing added emphasis to this feature, the curvature of the C-pillars is mirrored in the lines of the rear hatch window.

In profile the bodywork tapers down from the Concept’s roof (1,650 mm – 64.9 in – maximum height) toward a rear hatch that has been angled to accentuate the vehicle’s “lean-forward,” coupe-like silhouette.

At the front, the line from the top of Infiniti’s familiar double-arch grille extends through the sharp, high-performance, focused “human-eye” headlamps – another Infiniti signature design theme – around the edge of the hood to form a character line that runs over the wide, flared front wheel arches and along the flanks to the tapered rear.

Three-dimensional “blade-shaped” tail lamps taper inwards to the center of the hatchback panel, echoing the organic forms apparent elsewhere on the exterior.

“For Infiniti, the definition of ‘elegance’ can be the most sophisticated solution to a complex engineering or aerodynamic challenge, as well as a statement of striking aesthetics. This drives our instinct to create designs that are both beautiful and useful.” Alfonso Albaisa, Infiniti Executive Design Director

The exterior of the QX Sport Inspiration is notable for numerous design details that are visually striking while also fulfilling a clear functional purpose. For example, located above the sills on both sides of the car is a recessed step. As well as aiding ingress and egress for driver and passengers, this step – finished in gloss-black – reduces the apparent depth of the bodywork and raises the Concept’s visual center of gravity for a “go anywhere” SUV-like appearance.

Large vertical “blade-shaped” vents are integrated into the front fender, highlighting the width of the Concept while also admitting cooling air to the front brakes. Another pair of vertical vents, located behind the bold front wheel arches, reference those found on previous Infiniti concepts and also serve an aerodynamic purpose, extracting turbulent, drag-inducing air from the front wheel arches.

Another design feature artfully blending form and function is the performance-inspired rear diffuser, which aids aerodynamic efficiency and is careful integrated with the exhaust outlets.

At the base of the slim “floating” A-pillars, small rear-facing cameras in sleek housings replace conventional rear-view side mirrors. The A-pillars rise to flank the panoramic glass roof, which extends from the header rail to the rear hatch. The roof features a Cosmic Chrome™ gradation, visually blending the glasshouse into the rear roof spoiler, creating a distinctive aesthetic feature that also helps manage temperature within the cabin.

In line with one of the core tenets of Infiniti design, the beautiful, handcrafted cabin of the QX Sport Inspiration is both “driver-centric and passenger-minded.” 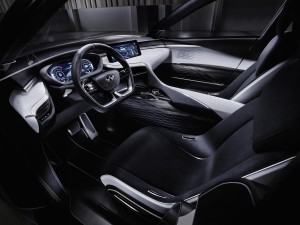 Laying the foundations for future Infiniti models, the striking interior is based around distinct zones for the passengers and the driver. The front section of the vehicle is focused on the needs of the driver, endowing a true sense of confidence and control. At the same time, the horizontally-biased interior architecture, with lines that wrap around the upper portions of the cabin, promotes a feeling of togetherness throughout.

The four-seat layout emphasizes the designers’ desire to give all passengers their own personal space within the cabin, while a fifth seat in the center of the rear bench is available if needed. Despite the relatively compact footprint of the car and the coupe-like roofline, the floating front and rear seats – suspended to allow more space on the floor of the cabin – and the generous 2,800 mm (110.2 in) wheelbase allow all passengers to travel in comfort.

When the doors are opened it is possible to see how the recessed sill-step is level with the floor of the cabin, emphasizing a sense of openness and referencing the harmonization of interior and exterior design.

A strong, twisting character line flows from the front of the cabin to the rear, tumbling downwards at the B-pillar, inspired by and echoing the organic lines of the exterior.

Echoing the organic, natural contours of the exterior and interior, Infiniti’s designers have experimented with different cabin materials, using them to dictate some of the resulting forms. The QX Sport Inspiration features a two-tone black-and-white interior, with black surfaces resembling the appearance of body armor, playing off against the soft and gentle forms of the brighter white surfaces.

“We experimented with a range of tailored and handcrafted materials throughout the interior, and our designers have used these different materials to dictate the form, contours and finish of the cabin. The combination of different types of leathers – both hard and soft to the touch – result in a more organic, natural finish.”  Alfonso Albaisa, Infiniti Executive Design Director

Many of the cabin’s surfaces are wrapped in robust black saddle leather, which designers used to dictate the structure and shapes of the central control stack, as well as the lower dashboard, armrests, and luggage-space cover. The thickness, finish, and shaping of the material is used to accentuate the rich, natural feel of the leather and to emphasize the cabin’s handcrafted appearance. Some of the hard black saddle leather surfaces are scored to replicate the sharp angles found in a crystal prism. Hard black saddle leather also lines the floor and kickplates, with laser-cut, back-lit Infiniti logos visible upon entry.

White leathers are used across the upper dashboard, including harder matt leather with a concave finish which lines the doors and adds visual texture – of shade and light. The multi-function steering wheel is finished in Nubuck leather, while the A-pillars and lining around the panoramic roof are all finished in black Ultra-suede®.

Contrasting black and white leathers are sewn together with silver stitching. Modelled on the Q80 Inspiration Concept, a contrasting tan edging – the hide’s natural color – also runs around the top of the dashboard and doors, as well as around the leather that lines the floor.

The color gradation of the panoramic glass roof acts as a shade for passengers in the rear in bright sunlight, while still affording a light and airy ambience.

The cabin’s driver-centric layout and minimalist controls are designed to allow the driver to focus more of their attention on the simple pleasure of driving. Clear and simple ventilation controls are embedded in the mesh of the air vents themselves.

Drivers can switch driving modes with a dial on the center console, and change gears with metal paddle-shifters mounted on rear of the steering wheel. Within easy view of the driver, a pair of compact monitors integrated into the A-pillars project the images captured on the two rear-facing cameras that replace the door mirrors. Between the front seats a small touchscreen panel provides rear-seat passengers with their own ventilation controls.