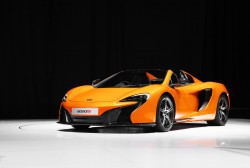 Following the global debut at the Geneva Auto Show, the McLaren 650S Coupé and 650S Spider are now on sale in the US and Canada across all 15 retail locations (13 in the US, two in Canada). Of these 15, McLaren Atlanta, McLaren Scottsdale, McLaren Washington DC and McLaren Vancouver were opened in the past six months and reflect the tremendous growth and success of McLaren in North America.

As the first example of the McLaren 650S rolled off the line at the state-of-the-art McLaren Production Centre in Woking, McLaren Automotive has released performance numbers and confirmed pricing as part of the global debut at the 84th International Geneva Motor Show.

The latest addition to the McLaren range accelerates from 0 to 60 mph in just 2.9 seconds, and can reach 100 mph in just 5.7 seconds. The standing quarter mile takes 10.5 seconds, and top speed is 207 mph in Coupé form. This performance puts the latest model from McLaren 0.6 sec faster over the standing quarter mile than the iconic McLaren F1 road car, and a full second quicker to 124 mph, underlining its performance focus.

Optimized aerodynamics ensure that the performance of the McLaren 650S is accessible and increases driver engagement. Enhanced handling, high-speed balance and steering turn-in result from improved levels of downforce. ‘Driving excitement is at the absolute heart of the McLaren 650S,’ explains Mike Flewitt, Chief Executive Officer, McLaren Automotive. ‘Of course the performance figures are important, and they help boost excitement. But they’re only part of the story. This is a car that’s about feel as well as measurement.’

‘The McLaren 650S represents 50 years of road and racing car know-how,’ comments Mike Flewitt.‘Everything we’ve learnt from the 12C and the McLaren P1™ has gone into this car, creating a car with the widest breadth of capabilities of any production supercar. It’s also a new benchmark in pure driving excitement.’

The McLaren 650S will make its US debut at an offsite location during the New York International Auto Show next month. Invited media will be the first to see the McLaren 650S on April 16-17 at a to-be-announced venue adjacent to Jacob Javitz Center.